On Monday night, Coin Center had their annual gala dinner in NYC which coincided with the Consensus Conference. I had the pleasure of giving a keynote which I will post in its entirety.

Hello. My name is Fred Wilson. This is my One Name profile. It is verified and resident on the blockchain at onename.com/fredwilson 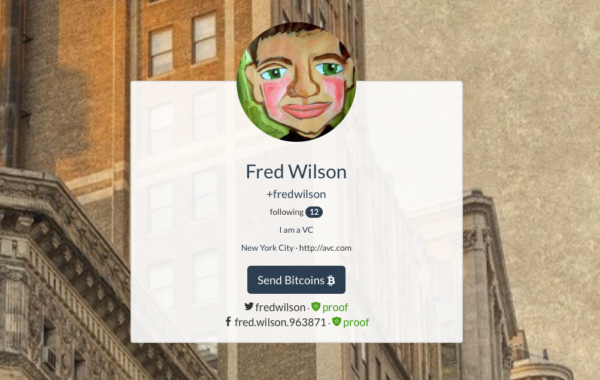 I have been investing in early stage emerging technologies for thirty years as a venture capitalist. I work at Union Square Ventures and we have been interested in and investing in the blockchain sector since 2011. We have watched this set of emerging technologies develop over the past five years and we remain very excited about the potential of decentralized trust systems.

I would like to talk tonight about resilience. Resilience is a trait we admire in entrepreneurs and it is a trait we look for in technologies and systems.

I remember when I first heard about the Internet, early in my career as a VC. It was described to me as a massively decentralized system designed explicitly to survive an attack that brought down one or more of its core systems. I thought about that and it resonated with me. Here was a system that was explicitly not controlled by a single entity and was designed to be resilient and self healing. A few years later, I left the venture capital firm I was working at and started a new firm dedicated to only investing in Internet based businesses. For me, the Internet was, and is, to use a term I learned from Joi Ito, a “belief system”. I have a deep and fundamental belief in decentralized, open, resilient systems. That belief has informed what I have invested in for most of my career and it has informed what I believe in politically and economically.

So when, back in early 2011, my friend Rikki Tahta told me about Bitcoin, I was immediately smitten. Here was another technology that was designed explicitly to be resilient, decentralized, open, and available to anyone. It fit like a glove into my belief system. So I started writing about it, meeting with people who were working on it, and, eventually, investing in companies built upon this new technology. We now have a handful of portfolio companies that are building businesses on blockchain technology. This is not just my area of interest. Every one of our investment team members works on and is involved in investing in this sector. Our pace of investment in this sector is increasing.

And yet, standing here today, I cannot point to a blockbuster company that has been built on blockchain technology. There has been no lack of trying. There is no lack of funding. I am a true believer and yet I can’t help but admit that despite all the hype, all the effort, all the capital invested, there has not been anything truly transformative to society that has been built on the blockchain, except perhaps Bitcoin itself and likely Ethereum. But these are enablers. What have the enabled other than grey and black market activities?

You know you are in a unloved sector when you start getting hated on for your boosterism on Hacker News. I saw this comment there last week:

After every VC, every founder, just everybody is talking about AI and bots Fred is a bit late to the game but better late than never. Or maybe writing about the Blockchain kept him back.

I don’t approach things that way, moving from one hot sector to another. It is a recipe to be late to everything. And I don’t let the haters get to me either. But I do find it amusing, and telling, to understand the broader mood. Bitcoin, blockchain, and all of the rest of this sector are in this portion of the hype cycle curve: 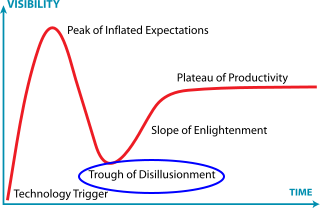 Which brings me back to resilience. That is what keeps me excited about the blockchain sector and that is what all of us who are true believers need to have right now.

This is a Bitcoin price chart since Jan 2013.

If you draw a trend line from the start of that chart to the end of that chart, it is steadily up and to the right. And during that same time, we have seen so many things that should have meant the end of Bitcoin. And yet, it just keeps chugging along. That tells you something.

This is a chart of transactions on the Bitcoin blockchain over that exact same period. 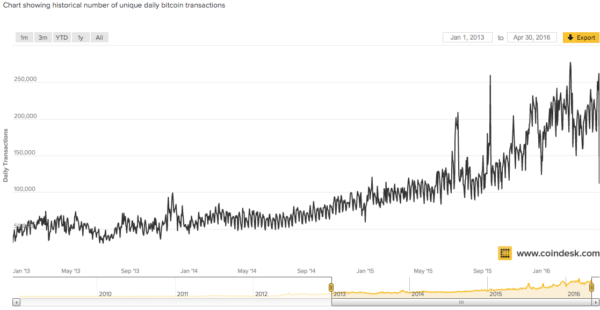 Same thing. Up and to the right, day after day, month after month. This is a resilient system.

So just like the set of technologies we are working on developing and commercializing, we need to be resilient in our work. And personal and professional resilience starts with a belief system. We must remind ourselves of why we believe in open, resilient, distributed, and decentralized systems and the power of these systems to produce profound change for businesses, economies, and society at large.

There have been and will continue to be headwinds for blockchain based technologies. Fundamental change doesn’t come easily.

We have seen that open source communities can and do struggle to develop consensus about what changes should be made and when and how. That will continue to be a challenge. I personally believe that multiple projects with multiple open source teams developing things in parallel is the best way to manage this risk. That could be multiple teams working on Bitcoin’s core system. Or it could be multiple blockchains and cryptocurrencies. It is likely to be both.

We have seen that the companies and industries that are most threatened by these technologies will not sit idly by while the market adopts new ways to do things that they do not control. I see the wave of private blockchains and startups that build and sell them as an attempt to coopt these technologies. It may take some time for the market to see this for what it is.

And we know that governments and the elected officials and bureaucrats and regulators who work in them are uncomfortable with these technologies and can be expected to try to rein them in as much as they can. This is where Coin Center comes in and I want to personally thank Jerry and his team for all that they have done, are doing, and will do to navigate the regulatory forces for our sector and find common ground and win/win solutions that move our industry forward in a way that governments can live with. This is hard work, done largely behind the scenes, with very little fanfare. And yet without it, our industry cannot and will not succeed. So thank you Jerry and thank you to everyone who supports Coin Center and works on it.

But let me tell you this. If they aren’t laughing at you, you aren’t working on the right things.

We are working on the right thing. It is taking longer than I thought and than you thought. It still isn’t clear to me how this market will eventually break out. But all the signs that I look at are moving up and to the right, day after day, month after month, year after year. The technology is working. And our breakthroughs will come. Maybe they are right around the corner. Or maybe they are years off. But if we stay resilient, like the systems we are working on, we will prevail.