September 11th snuck up on me this year. It wasn’t until Friday evening, walking out of a restaurant in the village, when I was greeted with this sight. 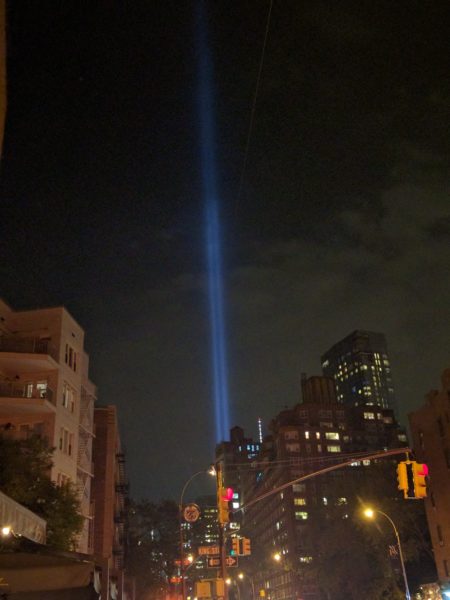 But September 11th is always there in the back of my brain. When a plane flies low over NYC, I always look up with a slight panic in my gut.

That’s how it happened for me and two colleagues having breakfast before a board meeting that morning. We were sitting outside at a cafe about a mile straight north of the towers. A plane flew low right over us, we jumped up into the street and watched that plane bank and slam right into the tower.

The rest of the day unfolded a bit like a dream. We were just moving through it, taking care of things that needed to be taken care of, but mostly staring at the TV screen trying to make sense of things that make no sense.

I don’t think much about that day anymore. But when someone brings it up the flashback is vivid and real. Everyone says “I remember exactly where I was that morning.” Of course we do.

It was fifteen years ago. My daughter who was ten is now twenty five. The VC firm I was working at is long gone. The company whose board meeting we were heading to is long gone too.

Time does heal all wounds, but the scars remain. And for as long as I live, the eleventh day of September will be a day to stare at them.