comScore released its annual US mobile app report yesterday. The data comes from a large mobile panel of US smartphone users that comScore maintains.

The story is one of maturity and consolidation, themes we have visited a lot on AVC in the last few years.

This is the most interesting slide in my view: 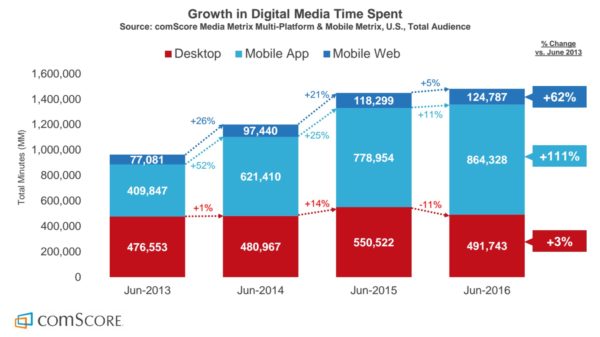 If I am reading this chart correctly, digital media time spent across desktop web, mobile app, and mobile web only grew 2% in the last year. That is a significant slowdown from prior years when time spent spent was growing 20% per year or more driven by very large growth in mobile.

Again, this is US data only. The US is among the most saturated markets in the world. But even so, this is a pretty significant slowdown.

This is the second most interesting slide in my view:

Ten of the top twenty-five mobile apps (also ten out of the top twenty mobile apps) by UV are owned by Facebook, Google, and Apple. That’s not new news. The number was similar last year. But this level of consolidation in a maturing market is quite telling.

So is there a ray of hope anywhere in the comScore report? If there is, it is with Millennials who use all of these top apps frequently, but are also drawn to a different set up apps that are younger and less mainstream: 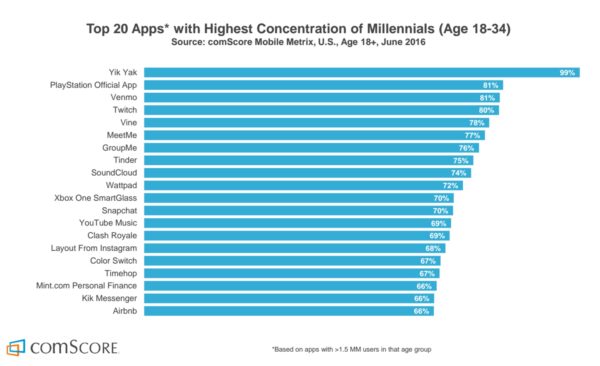 Snapchat is the poster child for an app (and a company) that has taken a different approach and built a lasting and defensible mobile franchise in the process. There are some other names on this list that I think are heading in a similar direction and three of them are USV portfolio companies (SoundCloud, Wattpad, and Kik).