Its that time of year. World Series, Halloween, Daylight Savings Time, and Thanksgiving.

It’s a wonderful time of year even though the days are getting shorter, it’s dark outside on my way to the gym in the morning, and I have to wear a coat to work.

There is something about the change of seasons, kind of like cranes actually, that reminds us that change is never ending, and that is a good thing 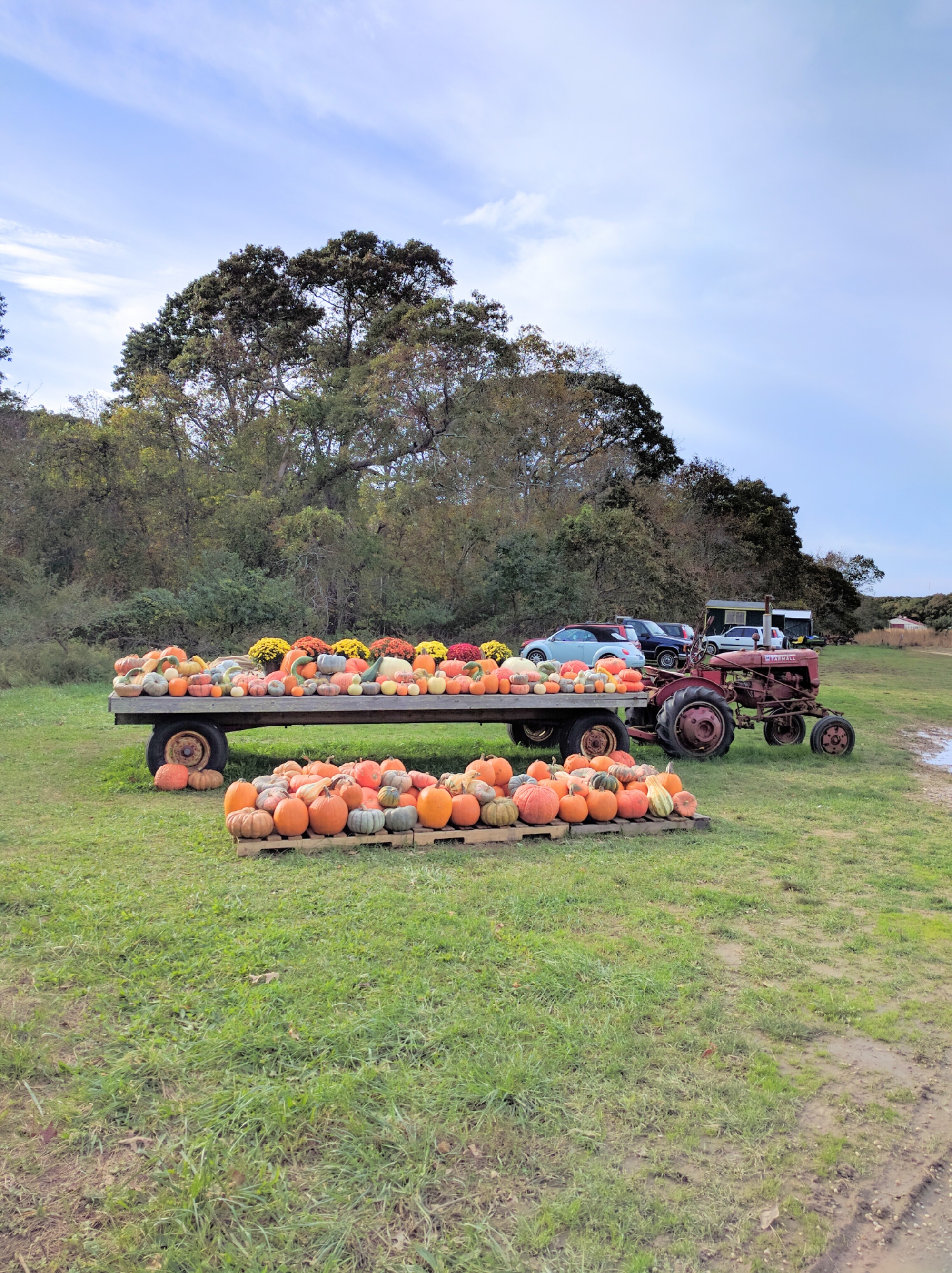 I was walking down a street in the Chelsea neighborhood of NYC this morning and came across a street closing. 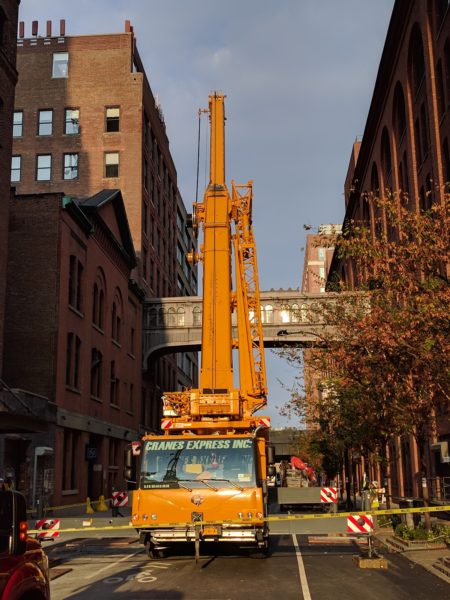 The entire block was closed to cars because that crane was busy lifting heavy material to the upper floors of a building that is being constructed right now.

This is a common occurrence in NYC these days. There is construction all over the place.

I was in a cab last week and the driver told me that he has never seen more street closings and cranes in NYC than right now. He was complaining about it.

But I have a different view. Cranes, street closings, road construction, manhole work, etc are an inconvenience for sure. But they are a sign of vitality, the look of a city evolving and growing in front of our very eyes. Lose the cranes and the construction crews and you will see a city slowly dying.

But there must be a balance. We cannot decide to stop evolving and growing. We need to find ways to do it gracefully and respectfully. The anti-development forces are doing us all a favor by making sure that happens. But when they dominate the discussion, things grind to a halt and nothing happens. That is not where we want to be.

So when I see a street closed by a crane, I celebrate it. It’s progress. No pain, no gain.

Video Of The Week: Bitcoin Mining

I think this is the most interesting of the six Trust Disrupted episodes:

Fun Friday: The Weekend At Wrigley

The Cubs and Indians face off tonight, tomorrow, and sunday and the result of these three games will say a lot about who is going to walk away with the World Series ring this year.

I think the Cubs will be strong at home and believe they will win at least two of these three games and possibly sweep.

What do you think?

Prescriptions On Your Phone

My partner Andy blogged this week about an investment we made earlier this year. It is called NuRx and its an entirely new way to get medications.

The efficiency of scrolling through a mobile app, finding the medication you need, filling out some information, and then having the meds show up at your door a few hours later is vastly superior to the process Andy described.

We are looking for services in health care that dramatically improve the user experience of obtaining health care services and lower the cost of providing those services. We also believe that these services, when delivered on the device you have with you all of your waking hours, will over time become an important repository of your personal heath care information. And one you control and have the primary access to.

All of these things; improved user experience, dramatically lower costs, user control over their data, portability of providers, are a direct and aggressive challenge to the existing incumbent health care system.

And I can’t think of any industry that deserves that challenge more than health care.

The FinTech Innovation Lab is run by the Partnership Fund for New York City and Accenture. Accepted companies will get the chance to refine and beta test their financial technology products in New York City in partnership with the world’s leading financial services firms and receive mentorship from the Lab’s Entrepreneurs Network.

What Are App Coins?

Open platforms have proved difficult to create because it has been historically difficult to monetize them even if they become successful—by nature they are public goods. Now, however, the developers of a cloud storage service can incorporate a scarce access-token, an appcoin, into the design, distribute that token to users, retain some amount of the token for themselves, and if the platform proves popular, the token (alongside the holdings of the developers) will grow in value and remunerate the developers for providing a public good. This new model challenges the concept of equity as traditionally understood, and carries entirely different risks and rewards.

The idea that we now have a monetization model for creating and maintaining a public good (ie Twitter) is something that makes me incredibly happy and poses all sorts of interesting questions about the future of venture capital.

I read this story about how hackers got into Colin Powell and John Podesta’s emails.

It is somewhat shocking to me that Google’s algorithms allowed fake emails from Google to get into a Gmail user’s inbox.

One of the many reasons I use Gmail over any other email service is its algorithms that keep spam and malicious emails out of my inbox. They have done a remarkably good job of that for me over the ten(ish) years I’ve been on Gmail.

I hope they take this as a challenge to improve their anti-phishing algorithms.

Some Thoughts On Airbnb's Struggles In New York State

As many readers likely know, this week New York State Governor Andrew Cuomo signed a bill called S6340A/A8704C, which will levy heavy fines on individuals who advertise short-term rentals of residential multiple dwelling units in New York. This ends an effort that lasted several months to convince the Governor to veto this bill which was passed by both legislative bodies in Albany earlier this year.

In its lawsuit, filed Friday afternoon in Federal District Court in the Southern District of New York, the company contends that the law violates the company’s constitutional rights to free speech and due process, as well as the protection it is afforded under the Communications Decency Act, a federal law that says websites cannot be held accountable for content published by their users.

It is possible that this matter will be settled by the courts.

But it is my hope that, instead, calmer heads will prevail and New York State will pass sensible legislation that allows short term rentals when the tenant or owner is not present.

Airbnb has proposed a five point plan that attempts to address many of the issues that New Yorkers have with short term rentals.

This proposal is similar to legislation that has been adopted in large urban cities like Chicago.

There are many reasons why the current situation is not ideal for anyone. Most people living in apartment buildings don’t like the idea of an Airbnb in their building. It is also problematic when landlords to take apartments off the rental market and create illegal hotels. And landlords need a way to enforce the rules outlined in their leases.

On the other hand, many New Yorkers use income from short term rentals to allow them to afford an apartment in NYC when they have jobs that require them to travel extensively. There are also many New Yorkers who rent their homes during busy periods to make some extra income.

An outright ban on short term rentals is a bad thing for many New Yorkers.

I am certain there is middle ground to find a compromise that addresses the legitimate issues while allowing short term rentals to continue. And I am hopeful that will eventually happen.

Both sides are to blame for where we are right now. Airbnb allowed the NY short term rental market to emerge over the past seven years without sufficient concern over the negative impacts of unregulated short term rentals. It took way too long to engage in a real and substantive discussion with legislators and regulators and when it did, there was a lot of bad blood between both sides.

On the other hand, the hotel unions and the real estate industry have used their significant clout in Albany to push for a law that is overly restrictive and hurts many New Yorkers. And they got the legislature and the Governor to support it. It shines a bright light on the kind of back room dealing that voters are sick and tired of, in Albany and all around the US.

I would urge the Governor to provide some leadership here now that he has satisfied the legislature by signing their deeply flawed bill. There is a proposal on the table from Airbnb to regulate short term rentals sensibly. The Governor and the legislature should engage with that proposal. And the real estate industry should engage as well. Short term rentals can be a good thing for them too.

Audio Of The Week: Michael Moritz on Studio 1.0

This is almost a year old, but most of it is still very relevant.