I started working actively on K12 education about five years ago when a few of us helped start The Academy For Software Engineering. Early on in that process, I made it a point to visit about a dozen high schools around NYC and talk to the Principals and teachers in those schools. I was curious about a lot of things, mostly how you make a good school (answer is hire a great Principal), but also what kind of tech infrastructure was in the schools.

On the latter point, I learned that most schools had broadband and wifi, but the implementation was often poor and in need of significant upgrade. The good news is that many K12 schools have seen significant investments in broadband and wifi in the past five years through a number of federal, state, and local programs. But there is more to do on this point.

In terms of computers, I saw a range of approaches. There were computer labs where an entire room was outfitted with desktops. Windows machines were quite common but so were desktop Macs. But most schools were using laptop carts. They look like this: 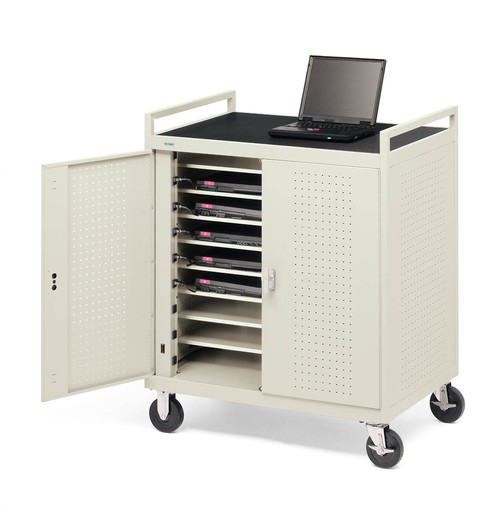 The ones I saw in use in the NYC public schools generally hold thirty laptops and power cords.

Teachers would wheel one of these carts into their classroom and students would grab a laptop and use it for the entire class and then put it back.

Five years ago, most of the laptop carts I saw were filled with MacBooks. I was aghast when I saw that. I did the math and assumed that a laptop cart filled with Macs was costing these schools something on the order of $30k or more. And someone had to manage all of the downloaded software on these devices. It seemed like an expensive and painful solution.

It was around this time that Google launched its first Chromebook. I told everyone who would listen to me that putting inexpensive Chromebooks in these carts was going to be a better solution. An added benefit of using browser based software on these devices is that the student can grab any device in the cart, log in using their email address, and immediately be provisioned with their work and applications in the cloud. It seemed to me that this was going to be the way to go.

More and more software is coming to market that makes learning more fun in the classroom. A good example of this is our portfolio company’s Quizlet’s Live tool that allows teachers to create real time learning challenges in their classrooms. Much of this software is free to use with premium upgrades (freemium model!) and can drive down the cost of curriculum for the schools and teachers.

But you need computers in the classroom to make this stuff work and the Chromebook is a much more affordable and manageable solution than a laptop. I am thrilled to see the K12 system adopting them.