My friend Dave sent me this hat a few days ago: 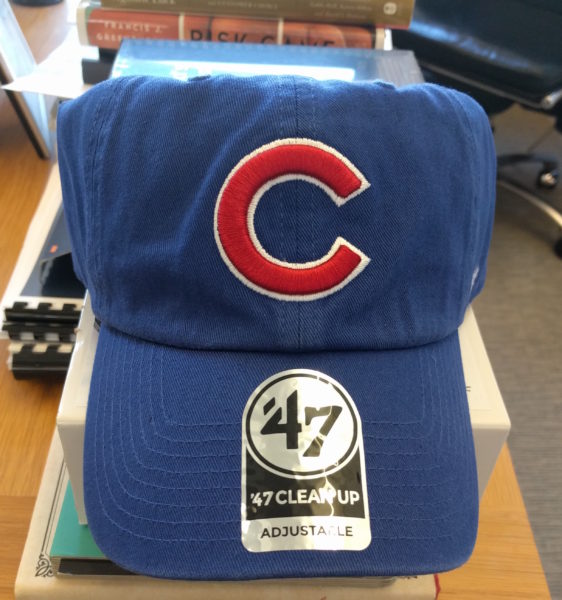 I hope to be wearing it for the next week and a half.

The Cubs have not won the World Series in 108 years.

Unless you are a Dodgers or Indians fan, I think you have to get on this bandwagon.

Do you all agree?

A New UI For Coinbase

For those of you who buy and sell and hold Bitcoin and Ethereum at our portfolio company Coinbase, there is an entirely new redesigned UI for you at beta.coinbase.com. It will be rolled out to all of the users in the next couple weeks.

Here’s screenshot of what the new dashboard looks like:

The redesign was driven by the move from a Bitcoin only service to one that supports multiple digital assets. Today that means Bitcoin and Ethereum but over time it will likely mean many more digital assets. Literally a coin base.

Fortune did a nice writeup on the new UI (which is where I got that screenshot) and also talked about the evolution and growth at Coinbase in the past year.

It is nice to see an awakening in the media to the changes afoot in the blockchain sector. Coinbase has been riding those changes and has seen strong revenue and customer growth over the last year as a result. As more and more people buy and hold digital assets, they are going to need a trusted, safe, and compliant place to buy them, sell them, and hold them. Coinbase continues to be the best place to do all three of those things.

I like what Larry Lessig wrote here about leaks, particularly this part:

Neera has only ever served in the public (and public interest) sector. Her work has always and only been devoted to advancing her vision of the public good. It is not right that she should bear the burden of this sort of breach.

If we needed to add more reasons why someone would choose to avoid public service, we now have one more – wikileaks will out your emails and embarrass the hell out of you.

But I do think wikileaks has gone overboard here. There is, as Larry says, a difference between leaks of substance and leaks of embarrassment. Let’s try to keep the leaks to stuff that matters and avoid the petty stuff please.

The NY Times has a great longish piece on David Letterman today.

This quote got my attention:

Maybe life is the hard way, I don’t know. When the show was great, it was never as enjoyable as the misery of the show being bad. Is that human nature?

Building companies includes a lot of “misery of the show being bad” as David Letterman puts it.

And I really love the idea that you can enjoy that struggle.

Obviously you want the “show” to be great, but his point is that greatness is fleeting and you have to go through a lot of bad shows to get to some good ones and you’d better figure out how to enjoy that struggle, as he and his team did.

Good advice for all of us who hang out in startup land.

In venture capital, thankfully, VCs don’t drive a lot of the sell decisions. I wrote about that back in 2009. Most sell decisions that really matter in a venture portfolio will be made by the founders and management of the portfolio company, including the timing of the public offering if that is where a company is headed.

But even so, I have struggled with the sell decisions, both personally and professionally, over the course of my career. I have held on way too long and watched a publicly traded stock literally go all the way to zero without selling it (ouch). And I have made the even worse decision of selling too soon and watching a stock go up three, four, five times from where I sold it.

So where I have landed on selling is to make it formulaic.

If we (USV) have to make a sell decision, we like to have a policy and stick to  it. We like to distribute our public positions as soon as we can, for example. That’s a policy and we stick to it. If you look at the SEC forms we have filed as a firm over the years, you can see that is what we do. It is a formula. It doesn’t mean that it is the right decision in each instance, but it does mean that, if we stick to it, we will do the same thing every time and the law of averages will work things out. We also let the people we work with know that is our policy so they are not surprised by it. What is worse is to make each decision emotionally and get them all or most of them wrong.

Personally, I like to dollar cost average out of a stock (sell a position over time instead of all at once) and I also like to hold onto some of the position for the very long term (schmuck insurance). I have a formula for the disposition of public stocks I get via distribution from USV and the other VC funds we are invested in. We execute the formula time and time again. It takes the emotion out of the decision and it works better for us.

The thing I have learned about selling is that it is almost impossible to optimize the sell point. You need a crystal ball and you need to know something that others don’t know. That is either impossible or criminal. So I don’t try to optimize it. I try to make it formulaic and systematic. It works better for me and I think it may work better for you too.

Young companies are a bit like children. They require care and feeding.

The feeding part comes naturally to investors. Because that is what we do. We invest capital into young companies in hope of generating large returns on those investments.

The caring part comes harder to investors. At least it did to this investor.

But as I enter my fourth decade in venture investing, it is the caring that keeps me going.

Caring is exactly what it sounds like. Giving a shit. Actually caring about the company, the team, and the business.

The thing about caring, when done right, is that it means everything to the founders, the managers, and the team.

They feel it, more than you think possible.

And that allows you to encourage them to adjust their thinking, their plans, their team.

I have found that feeding doesn’t change behavior very much. It works well in the short run (do this and we will invest more money). But it doesn’t work very well in the long run.

Caring, on the other hand, has immense power to bring positive change.

I see this every day. And it encourages me to care even more.

Video Of The Week: Private vs Public Blockchains

This is episode 6 of Trust Disrupted, which I blogged about earlier this week. It features many of my arguments in favor of public blockchains and also plenty of the counter arguments.

I have no idea why I am holding my head at such a crazy angle in much of this. It hurts just to watch it 🙂

I read this post this morning on why this fintech analyst and investor is “short ethereum”.

The pro-bitcoin and anti-ethereum arguments are interesting and worth digesting if you are into the blockchain sector as I am.

But more interesting to me is that we are talking about some fairly cutting edge computer science here. Ethereum is still very much a work in progress. A computer science experiment. And a very ambitious one too.

And yet they are tradeable, like stocks, bonds, currencies, etc. You can short them or put on a hedged trade (long BTC/short ETH).

Biotech has long been like this. There are publicly traded biotech companies that are doing cutting edge science and you can place bets on wether these experimental projects will succeed in developing some new medical miracle, or not.

But “tech” has not really been like that. You had to be an angel or early stage investor to make these sorts of bets in the software sector.

Not any more. You can buy and sell alt-coins, token, ICOs, or whatever else you want to call these digital assets.

It is fascinating to see this happening and think about where it might go.

All I have to say this morning is go Cubs.

Man I loved how they came back last night.

I’m rooting for the Cubs to go all the way this year.