UK-based VC David Kelnar wrote an excellent primer on Artificial Intelligence that is a relatively quick read and helps explain the technology and its advancement over the past sixty years since the term was coined in the mid 1950s.

I like this chart which explains the relationship between AI, machine learning, and deep learning.

But my favorite part of David’s post is his explanation of why AI has taken off in the past five years, as this chart shows: 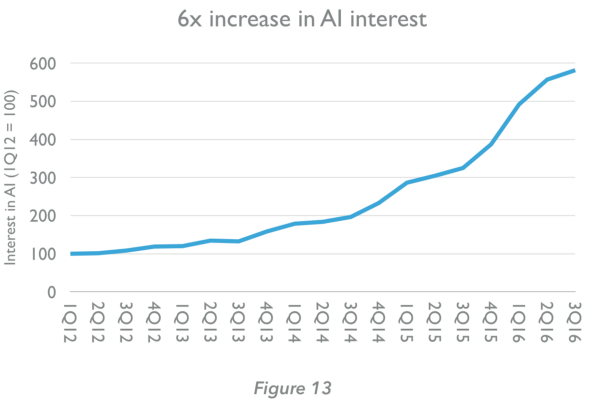 Like most non-linear curves, it is not one thing, but a number of things happening simultaneously, that is causing this explosion of interest. David cites four things:

I feel like we are well into the “AI wave” of technology right now (following in order web, social, and mobile) and this is a wave that seemingly benefits the largest tech companies like Google, Facebook, Amazon, Microsoft, IBM, Uber, Tesla which have large datasets and large userbases to deploy this technology with.

But startups can and will play a role in this wave, in niches where the big companies won’t play, in the enterprise, and in building tech that will help deliver AI as a service. David included this chart that shows the massive increase in startup funding for AI in the last four years:

I would like to thank David for writing such a clear and easy to understand primer on AI. I found it helpful and I am sure many of you will too.