I am tired of the classic left/right perspective on society, policy, and politics. I realize that markets are an incredible tool to allocate resources efficiently. And I also realize that markets are subject to failure and we need to protect our society from these market failures. I am not a purist on either side of this debate and I find the hard core advocates on the far left and the far right impossible to take. I believe orthodoxy is one of the worst human traits. 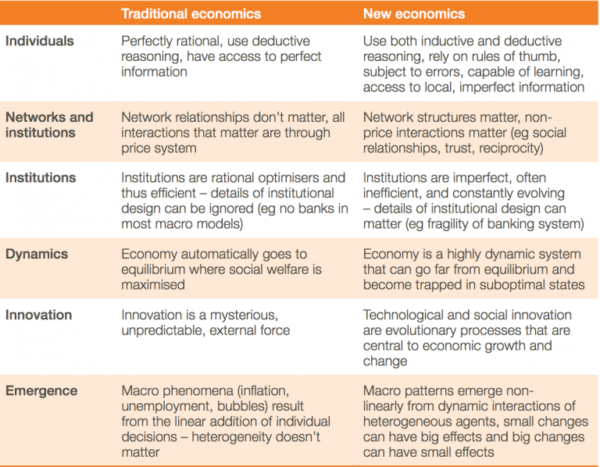 The post goes on to explore how these new economics thinking will eventually impact politics, policy, and society at large.

One particular example reminds me of our work at USV on “Regulation 2.0”:

First, rather than predict we should experiment. Policymaking often starts with an engineering perspective – there is a problem and government should fix it. For example, we need to get student mathematics test scores up, we need to reduce traffic congestion, or we need to prevent financial fraud. Policy wonks design some rational solution, it goes through the political meat grinder, whatever emerges is implemented (often poorly), unintended consequences occur, and then – whether it works or not – it gets locked in for a long time. An alternative approach is to create a portfolio of small-scale experiments trying a variety of solutions, see which ones work, scale-up the ones that are working, and eliminate the ones that are not. Such an evolutionary approach recognises the complexity of social-economic systems, the difficulty of predicting what solutions will work in advance and difficulties in real-world implementation. Failures then happen on a small scale and become opportunities to learn rather than hard to reverse policy disasters. It won’t eliminate the distortions of politics. But the current process forces politicians to choose from competing forecasts about what will and won’t work put forward by competing interest groups – since it is hard to judge which forecast is right it is not surprising they simply choose the more powerful interest group. An evolutionary approach at least gives them an option of choosing what has been shown to actually work.

I also like this bit about the tolerance for failure:

A major challenge for these more adaptive approaches to policy is the political difficulty of failure. Learning from a portfolio of experiments necessitates that some experiments will fail. Evolution is a highly innovative, but inherently wasteful process – many options are often tried before the right one is discovered. Yet politicians are held to an impossibly high standard, where any failure, large or small, can be used to call into question their entire record.

I don’t think the way we do things in startup land should be a model for how everything should work, but there is a lot to be learned from the way the tech sector works. Innovating, trying new things, measuring the impacts of these new things, and evolving leads to forward progress. And when something fails, we accept is as a lesson learned, not something to be embarrassed about (or fired for).

If the worlds of economics and politics are moving in our direction, I am very pleased and optimistic about that.