Our portfolio company Coinbase opened the doors yesterday to a project they have been working on for a long time.

It is called Token and its a mobile browser for Ethereum apps. But it is also a messenger (based on the Signal Protocol from Whisper Systems) and an Ethereum wallet.

The plan is to set Token up as a separate business:

Our plan is to build it out as a separate legal entity and brand, separate from Coinbase. Similar to what we’re doing with GDAX.

The Ethereum ecosystem is emerging quickly and there are a lot of interesting things going on in it.

Token is about giving developers a canvas to showcase their Ethereum apps, with a wallet and a messenger connected to it.

The goals of the Token project are to:

Token is in a public developer beta. It is operating on a testnet so no real money is in use yet:

We’re releasing the developer preview of Token today. It is still early days, and you can expect some bugs (so please be kind in your reviews). For today’s launch, we are using testnet Ethereum, so there is no real money to lose if you encounter an issue. We plan to continue shipping updates approximately every week, and move to mainnet in the coming months for a wider release.

You can install the Token app on Android and iOS today.

If you’re a developer you can read through our developer documentation.

I’m fredwilson on Token in case you want to message me there: 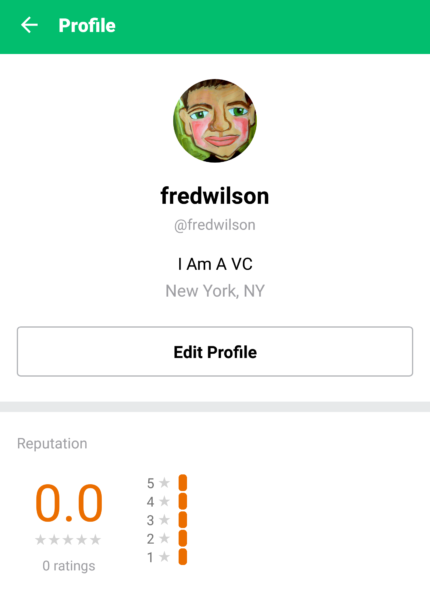 I expect this general idea (a developer platform, combined with a mobile messenger, combined with cryptocurrency for payment) is going to be a powerful combination. The blockchain sector has been waiting for its “Netscape moment.” The web browser made the world wide web understandable and accessible by mainstream users. I think something like Token can do the same for blockchain applications and I expect we will see a number of different approaches to this general idea.