I saw a friend last night who has been trading fiat currencies for thirty years. He looked at the Bitcoin chart and said “I would be worried about Bitcoin if I were you.”

He knows that we own a fair bit of Bitcoin (and Ethereum).

My take on the selloff that continues in the leading cryptocurrencies is “easy come, easy go.”

Anything that goes up 38x in six months can easily go down by just as much.

Tapping people who have made 50x their money on ETH to invest in your whitepaper is a great way to raise money until those people start to lose money on their ETH and fear starts overtaking greed as the dominant emotion in crypto land.

I remember the two bubbles we experienced in BTC back in 2013: 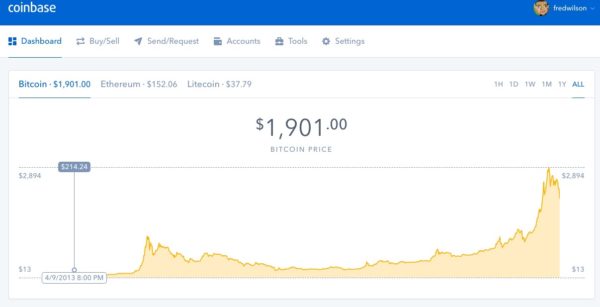 In November 2013, BTC traded briefly above $1000 and then faded, and did not see that level again until January of this year. 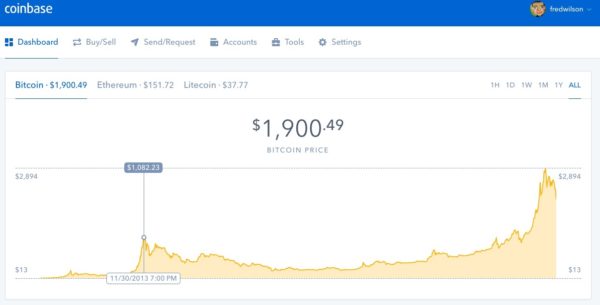 I remember back in the late 90s, a reporter asked my partner at the time Jerry Colonna what he looked for in entrepreneurs.

Jerry said “I want to back people who are doing a startup because of the mission rather than the money, because someday the market will crash and the money will be gone and I want to be with an entrepreneur who will still be around then.”

Bubbles always attract people who are chasing the easy money. And those people come and go.

But crypto is about a lot more than making money.

And the people who are into crypto because of the mission, a global decentralized platform for innovation, are going to be around after this bubble bursts, and the next one bursts, and the next one bursts. They have been around since before the April 2013 bubble and the November 2013 bubble, building this important technology. And so have I and I’m not going anywhere either.