I exchanged emails today with someone who wanted to connect with me on LinkedIn.

I told him that “I don’t do LinkedIn.”

But beyond that, I don’t do LinkedIn.

So to everyone who is sending me messages via LinkedIn, please know that I am not reading them. I suspect that is obvious to anyone who has tried that approach more than a few times.

For me, the trifecta is email, twitter, and this blog.

That is a pretty large surface area via which folks can connect with me.

Email is hit or miss. I get hundreds of emails into my “Important” inbox on Gmail and hundreds more than don’t get into “Important” and thus don’t get read by me. Though I try to read every message and actually do respond to hundreds every day, I don’t get to all of my email.

I am better with Twitter. I read every notification that I get and respond to many.

And this blog is yet another place people can reach me.

I understand that it is frustrating to reach me and that I can be unresponsive.

But if you stick to email, twitter, and this blog, you have the best chance of getting a response from me.

Keep The Degree Of Difficulty Down

In many sports, like diving, gymnastics, skating, etc, the way to win is to perfectly execute a high degree of difficulty move.

In startups, I advise founders to avoid that way of thinking and try to execute a simple dive and hit the water perfectly.

I have sat through numerous pitches where I am listening to the founder explain their technology and go to market plan and I think “this is going to be a reverse triple somersault with two twists in pike and there is no way they are going to land it.”

There is plenty of risk in doing a startup. People quit their good paying jobs and take equity in lieu of cash, investors risk capital, customers are asked to try something new that might not work. Amplifying all of that risk with a high degree of difficulty product roadmap or go to market plan is crazy.

Unlike sports like diving or skating, you don’t have just one or two of three attempts to win. In startups, you get to show your stuff every day, all the time.

So the better approach is to pick something simple to execute, nail it, then build on it with another relatively simple move, nail that too, and keep going.

When, ten years later, you look back at what you and the team accomplished, it may well look like a reverse triple somersault with two twists in pike, and it will have been exactly that, and you will have won the prize too. But you will have done it by doing the easier things perfectly thousands of times instead of the hard thing just once.

Video Of The Week: Digital Art On The Blockchain

About 3:15 into this video Chris Burniske asks an interesting question about how the CryptoKitties team thought about designing the kitties and the next ~four minutes are a revealing discussion about how blockchains may change the way digital art is created and sold in the future.

I backed this project today and bought myself a new pair of eyeglasses in the process.

Last night the Gotham Gal and I attended the annual benefit for the Scratch Foundation which provides financial support to the Scratch programming language and learning environment.

Mitch Resnick, founder of Scratch and leader of the Lifelong Kindergarten Group at the MIT Media Lab (I love that name so much I had to find a way to get it into this post), shared some numbers with the attendees last night:

In the last year, over 200 million people have used Scratch to make something, share something, or learn something.

I realize that not everyone who uses Scratch is a child, but the vast majority of them are.

There are roughly 2bn children on planet earth, so that means roughly 10% of our children used Scratch last year.

At our table, there were four high school students who I had invited to join us at the event. Two of them are ninth graders, just starting to learn to code and they are learning with Scratch. Two of them are seniors, experienced programmers who are experts in Java and a number of other languages. Four years ago, they learned to code on Scratch.

Scratch is the one ramp to learning to code. There really isn’t anything better to engage, excite, and inspire children to code something up and share it with the world.

In December I wrote about the Symphony Software Foundation as it was launching the NYC Open Source Fintech Meetup.

FINOS is about supporting open source software efforts across the financial services industry.

Financial services has often lagged other industries in adopting open source software related development practices, but that situation is changing quickly. Quantitative trading firms like Jane Street have built entire businesses based on open source. And perhaps there is no better example of the degree to which open source is impacting financial services (and other industries of course) than bitcoin, ethereum, and other crypto projects.

In the industries where open source has succeeded, independent entities such as foundations and trade organizations have played a critical role in fostering success. They have facilitated cooperation among players (often hard to do between fierce rivals) and encouraged dialogues necessary to solving common problems. This is precisely the role FINOS is playing in financial services.

Many of FINOS’ members are large global finance and tech companies such as Goldman Sachs, UBS, JP Morgan, GitHub, Thomson Reuters, and Red Hat. The accelerating adoption of open source in fintech is important not just for major financial institutions but also for emerging startups and younger companies looking to service incumbents or compete against them (or both). Examples among FINOS members include OpenFin and NodeSource.

Because financial services has always had an oversized impact on tech here in NYC, this is likely a huge boost to the NYC open source ecosystem too.

If you’re working in fintech I encourage you to get engaged with some of FINOS’ programs, either by just evaluating and checking out some of the work, or by getting actively involved by contributing code to a working group. If you’d like to hear more about FINOS and its work, you may want to attend their FinTech in Open Source Event Series this evening at 6:30pm where Gabriele Columbro will be interviewed by Spencer Mindlin of the Aite Group.

Finally, fintech is no different than any other “tech” sector in that we need more women, people of color, and other traditionally underrepresented communities at the table. The transparency and contribution models of open source projects can be a great on-ramp for anyone interested in a particular technology or problem domain. Together with K-12 CS education for all, open source can increase access to careers and opportunities historically all but closed to large segments of our society.

A number of USV folks are using the Brave browser on their phones and thinking about using it on desktop too.

We are not the average internet users at USV. We tend toward early adopter.

So I polled my twitter followers (which also skews early adopter) to see how many of them are using the Brave browser:

I am curious to get a sense of the adoption of the Brave browser: https://t.co/qSXLwnryBj

I don’t want to bias anyone who wants to complete the poll, so if you want to see the current results, pls complete it and you will see the results after you do that.

It’s interesting. I will say that much.

As I slowly heard toward moving the WordPress instance that hosts AVC to another provider, I was asked how large the audience was.

So I went and looked for the first time in a long while and sent that info to a potential new provider.

So here are some screenshots from Google Analytics:

This is the total usage over the last twelve months.

And here is a bit more about where you all come from and what kind of device you use to read AVC. 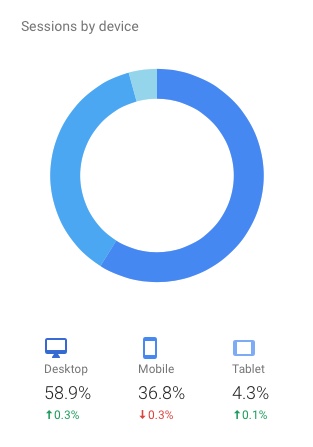 Google Finance and Yahoo Finance are two web services I have used daily since the early days of the Internet.

I have used Yahoo Finance since it first launched in January 1997.

Sometime in the last month or two, I can’t remember exactly when, Google revamped Google Finance.

The UI is cleaner and the service is much simpler.

But a lot of the power user features I had come to rely on in my daily work are either gone or buried so deeply that I can’t find them.

I also find it hard to search for a price quote now, which is kind of the most basic feature one would want in a service like this.

Anyway, I have switched a lot of my usage back to Yahoo Finance as a result.

But I am hoping that Google realizes that they messed some stuff up in the revamp and are working on fixing it.

Because I do prefer Google Finance. At least I did.

Slideshare Of The Week: State of Tokens

I like the deck a lot, particularly slide 34 (it’s a 36 slide deck), where he posits a timeline for the development of the blockchain ecosystem and where we are right now.