Last month I wrote a post called “The New Entertainment Bundlers” in which I talked about the emerging group of companies that are bundling subscription entertainment (and other services) into an offering that makes it easier and less expensive for consumers to acquire streaming entertainment services.

But something has happened on the way to the forum. Amazon has decided to unbundle its streaming video service and sell it in the US for $8.99/month. Amazon’s Prime service remains a massive player and bundler of entertainment in the market but the decision to unbundle video suggests that bundlers like Amazon and YouTube will also unbundle and compete on multiple dimensions. That makes sense.

Of course, it remains to be seen if a bundler like Amazon will allow another bundler, like Verizon or AT&T, to bundle their unbundled services. From a consumer perspective, that would be best. The more options and the more competition in the market, the better for consumers. It’s nice to see the market evolving in that direction.

One of the things that many of us dislike about our cable company is the bundle. We are required to subscribe to a host of channels when we only want a few. The promise of going over the top is that we can now choose the services we want without the ones we don’t.

But we are now witnessing the re-emergence of the entertainment bundle in the over the top world.

The leader in the new bundle movement is Amazon which is putting entertainment options into its Prime service. Estimates for Prime membership go as high as 60mm households. We are one of them and have been for as long as Prime has existed.

I expect Prime and Red to expand over time to include additional services (games, sports, etc). They are the new entertainment bundlers. I also expect others to enter this business. The most obvious candidates are the mobile carriers who already have a regular billing relationship with us.

The good news is that the new bundlers do not have a monopoly in their ability to offer entertainment to us. They have to compete with each other in an open market. So I expect that the bundles that emerge will be attractively priced and will be differentiated by price and content options.

Bundling has cost advantages like sales and marketing that can be offset across multiple services. And it is easier to subscribe to one service than ten. But over the top promises user choice over our entertainment options. With the new bundlers, we may be getting the best of both worlds.

I wrote about the live broadcasting craze earlier this week. There are three significant players in this market, YouNow, Twitter/Periscope, and Meerkat. I’m a shareholder in two of them (YouNow is a USV portfolio company and we own a lot of Twitter stock personally). So I’ve been quite interested to see how this market is shaping up and I’ve been using all three apps this week.

I did accidentally broadcast two seconds on Meerkat this morning.

@fredwilson sorry about that folks. Just looking around for something and hit the wrong button

That happened because I accidentally pushed a button and went live without realizing it (and tweet spammed almost 400,000 followers) to my great annoyance. That’s a UX fail as far as I’m concerned and I’m not sure I’m going to open that app again.

But I do see myself as a consumer of these broadcasts. We’ve been an investor in YouNow for something like three years and I’ve spent time watching broadcasts on YouNow. It’s a classic Internet content marketplace. There’s brilliance right next to silliness. But when you catch something brilliant on YouNow, it’s kind of magical. Tyler Oakley did a YouNow last night that had 120,000 viewers and he raised $20,000 for his Prizeo challenge during his live broadcast. You can watch Tyler’s broadcast via YouNow’s archive mode.

Which leads me to my feature friday topic – archives of live broadcasts. I’m getting real time mobile notifications on my phone from Periscope and YouNow and Meerkat and I’m also seeing invitations to join these live broadcasts in my Twitter feed. But I’m pretty busy during the day when all of these broadcasts are happening. I realize there’s value in watching live (the chat, the engagement, the favoriting, etc) but honestly I can’t tune in live very often.

What I’d like to be able to do, ideally right from my mobile notifications or the tweet, is to favorite or mark to watch later (I use the favorite button on many platforms as my “read later” button).

Twitter’s Periscope also has archives. I snapped this screenshot today from my Periscope app. 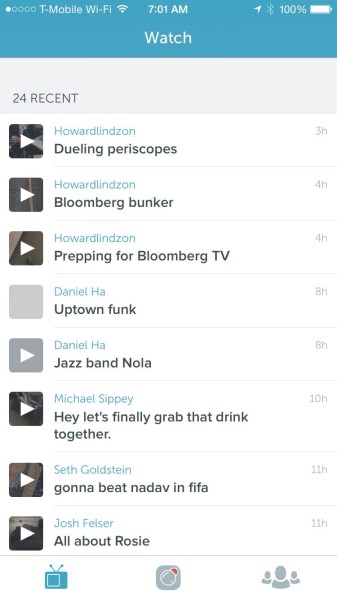 I watched my friend Howard”s broadcasts via this archive screen this morning, further confirming that I (and Howard too) are not interesting enough to be broadcasters 🙂

But regardless of whether or not that particular archived broadcast was any good, I think ironically archives are an important part of the livestreaming experience and I think the leading apps should support this functionality if they want to reach the broadest user base.

Video Of The Week: The Interview

I think it’s hard to argue that this was not the video of the week. So I’m making it so.

There’s just something about a major length feature film being viewable (and embeddable) on the web on the same day as it hit the theaters. I think that’s a big deal.

It’s Christmas Day, a holiday in much of the world and one of the biggest religious holidays of the year. We are spending it with family and friends on a beach in the caribbean. I hope that all of you are spending the day with friends and family. I know that Christmas is a tough day for some and I hope that you have someone close to you to spend it with.

If you are looking for something to do, I would suggest watching The Interview, which we discussed here last week. I have no idea if this movie is any good or not. What I do know is that a massive online viewership on “day and date” would be a big thing for the film industry. First and foremost, it sends a message to whomever hacked Sony that attacking a film studio is not going to stop a film from being shown. That, in and of itself, is an important message to be sent and we can all send it by watching this film.

Sadly, The Interview is only available to be viewed/downloaded in the US today. This is from the website:

While we do hope to see the release of The Interview across the globe, for the time being this is limited to the USA only. You can only purchase the movie with a US card, and can only stream it from a US IP address.

That’s a bummer and highly relevant to what we discussed here yesterday. I’m going to use a VPN to spoof our IP so we can watch it today. But this whole geo blocking stuff is so annoying.

But there is something else important going on here. The theater operators have to date been very hostile to the idea that a film studio would put a film out directly to viewers over the Internet on the same “day and date” that the film is released in the theaters. If Sony has a massive online viewership of The Interview today, that could change the dynamic between the film studios and the theater industry. And that would also be a good thing.

So I’m going to figure out how to download and watch The Interview today. I hope everyone who cares about this stuff joins me. This could be a watershed moment for over the top online film distribution.

So Sony has decided to pull the plug on The Interview after the major theater chains decided against showing the film.

This is a fascinating story on so many levels. It is not clear  to me who was behind the hacking attack on Sony, but there are some obvious candidates. We are witnessing cyber warfare in real time. And there are real costs involved. Who knows how much Sony has lost or will lose as a result of the hacking incident and all the repercussions. But we do know that The Interview cost $42mm to make and there were “tens of millions” of marketing and distribution costs already spent as well. All of that comes from the article I linked to at the start of this post.

How will this impact the entertainment business going forward? Will they now harden all of their systems? Yes. Will the cybersecurity industry get a boost from this incident? Yes. Will it change how they think about making films and other entertainment? I would have to imagine the answer to that question is yes.

And what of the film itself? Should we allow censorship of this form to exist in our society? Should the film get released in some form?

Of course this is about money to Sony. $42mm is a lot of money to write off. And it is a lot more than that given all the extra costs. But keeping the film locked away in a vault is also a cost. Both to Sony and to society. It says that the attack worked. I think the best thing Sony can do at this point is give the world the film and let us all decide what we think about it. We should not let cyberterrorist censorship have its way.

Video Of The Week: The Content Discussion At Web Summit

Web Summit was this past week in Dublin. I’ve been watching some of the video from the conference and I thought this discussion David Carr hosted about the future of content was particularly good.

Video Of The Week: New Tools For Filmmakers

Here’s a talk that my partner Andy did with our friend Jason Hirschorn last year about the changing landscape of filmmaking. It’s about 45mins long

The fourth annual Kickstarter Film Festival is upon us. Tomorrow night in Fort Greene Park in the fine city of Brooklyn NY from 7-11pm, Kickstarter will be showing films, and featuring musicians and local food purveyors. The festival will be replayed in Los Angeles on Sept 12th, and also in London later this fall.

Here’s a short trailer for the festival:

Here’s the website for the festival. It lists all the films that will be featured. Attendance is free.

And here’s a blog post that talks about how they selected all the films that will be featured.

It’s going to be a beautiful night in NYC tomorrow night. If you are considering your weekend plans, think hard about spending friday night in Fort Greene Park watching the amazing things that emerging filmmakers are doing right now.

The other day we gave a friend of my son a ride from one side of Park City to the other. While I was driving, my son and his friends were chatting about the state of hip hop in Salt Lake City. Turns out another of my son’s friends met a local hip hop artist in the SLC airport earlier this week. They got to discussing this local hip hop artist. My son’s friend said “he’s very under the radar right now, he only has a couple hundred SoundCloud followers.”

Contrast that with Lorde, who emerged as an “under the radar” artist on SoundCloud a few years ago. Lorde now has almost 2.8mm followers on SoundCloud.

Maybe follower counts are the new Billboard, Variety, etc of the entertainment and media business. It certainly seems that way.