I’ve been chairing a $40 million capital campaign for NYC’s CS4All effort to bring computer science education to every school and every student in the nation’s largest school district.

The good news is I can see the light at the end of the tunnel. Depending on whether you count “soft circles” or not, I think we have about $10 million left to raise.

We started out with a bang, announcing $11.5mm in contributions, including those of my wife and me, at the start of the effort.

Year one went well, with another roughly eight million raised.

Year two was a struggle and year three started out similarly. We made some changes to our team and strategy and message and the second half of year three was much better and we are entering year four with great momentum.

I have learned a lot about running a capital campaign or any sort of large and long fundraising effort and I thought I would share some of the big lessons:

1/ You have to be patient. It is a marathon, not a sprint. No matter how much you want it to go quickly, it won’t.

2/ Cultivation is the name of the game. You have to work the top prospects slowly and carefully and patiently. Most eventually come through but you need to invest a lot of time and effort without any certainty of closure. I found this particularly hard as I always want to be investing my time where it is going to pay off.

3/ You need people around you who are experienced fundraisers. There is an art AND a science to qualifying, presenting, and following up that the best people in the fundraising business understand and bring to their work. Without that, you are going to flounder.

4/ Communicating and engaging your donors is critical. I thought a donor would write one check and be done. It turns out many donors like to start small and grow their committment over time as they see progress and get comfortable with the effort.

It turns out that raising a big sum of money is like a lot of other things in business and life. Slow and steady is a virtue, great people make all of the difference, your best prospects are the people you have already closed, and frequent communication fixes a lot of problems.

I think all of these lessons I have learned in the last three years are applicable to raising capital for your business. Fundraising is a process not a campaign and it needs to be part of a CEO’s daily cadence and calendar.

You are never not raising money when you are running a company or any sort of business endeavor that requires capital, which is basically everything.

I am excited by the potential of cryptocurrencies and cryptogoods to change, and hopefully improve, the way we raise funds for charity.

Cryptogoods are particularly interesting as they are scarce and unique digital goods.

AVC community member Arnold Waldstein tipped me off to a really good example of this: 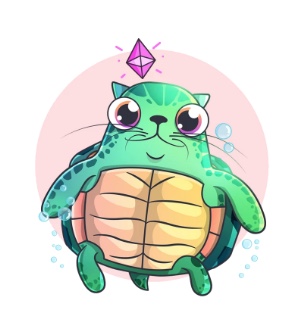 Little Honu (Hawaiian for turtle) is part kitten, part sea turtle. Honu is the first of a lineage of CryptoKittens ‘hatched’ to both raise funds and be ambassadors for their causes and to be bought, sold, and bred within the game itself.

Honu will be auctioned to raise funds for charity. The auction starts today, on Monday the 9th, ends Sunday the 15th.

Previous CryptoKitty charity auctions have raised in excess of $140K.  Donations are tax exempt for the winner if a US citizen.

This is part of a pilot for CryptoKitties, tied to their KittyVerse partner program and their Kitties-for-Good initiative.

CryptoKitties teamed up with Bill Tai and his ACTAI community of activists, athletes and investors, and Ocean Elders, a conservation group headed up by Sir Richard Branson, Jane Goodall and others to make this happen.

And Arnold is the quarterback of this initiative, creating and orchestrating a mashup of traditional, web, crypto and event-based grassroots marketing and partnerships.  It’s a first step in a broader project he is developing with Bill Tai to bring together incentivized communities through unique cryptoassets into a larger framework for non-profit projects everywhere.

I just bid on Honu and am currently the leading bidder, which I expect won’t last for long.

Funding Friday: Let's Give Away Some Crypto

As I mentioned yesterday, GiveCrypto.org is a non-profit that allows anyone to make a charitable donation of cryptoassets and get a charitable tax deduction (in the US).

If you want to join me in doing that, you can do so here.

Yesterday, Brian Armstrong, the founder and CEO of our portfolio company Coinbase, announced the formation of a new non-profit called GiveCrypto.org.

Joanne and I are donating some of our Bitcoin to this charitable effort. Here is a list of the donors who have committed to give away some of their crypto assets to this effort.

So what is GiveCrypto.org all about?

Well it is basically an effort to take some of the crypto assets that folks like me bought a long time ago, that have appreciated a lot, and use them to address poverty around the world.

As Brian wrote in the announcement:

GiveCrypto.org is a nonprofit that will both hold and distribute crypto to those in need. It’s an evergreen structure, meaning it gives away less than the amount that the fund grows each year.

Cryptocurrency is unique in that it can be used to send small amounts of money anywhere in the world, in real-time directly to an individual in need — they just need a mobile device with an internet connection. With distribution of aid to foreign countries, high fees and corruption are unfortunately common; cryptocurrency is a way of circumventing both.

I believe three things will happen:

If you would like to learn more about this effort, you can do that here.

If you would like to give some of your crypto to this organization, you can do so here.

One of the best things about having highly appreciated publicly traded stock is that it is the most attractive way to make charitable gifts.

The Gotham Gal and I do this all of the time and I encourage others (founders, early employees, investors, angels, etc) to do it.

Here’s how it works:

Let’s say you have shares of Facebook that you got when you joined back in 2006.

Let’s say that your exercise price was $3/share and that is your cost basis.

Let’s say you want to make a $100,000 gift to a great cause that you are deeply involved with.

Instead of taking out your checkbook (who does that anymore?) and writing a $100,000 check, consider gifting some Facebook shares.

So you ask the charity if you can gift shares. Almost every time I do that, the answer is yes. They give you a brokerage account that you can “DTC” the shares to.

And you instruct your brokerage firm to move the 571 shares to the charity’s brokerage account and you have made a $100,000 gift.

But, because you no longer have to pay the capital gains taxes on those shares when you sell them, and neither does the charity, you have a much more tax efficient gift.

I figure that a stock gift costs about 10-20% of the dollar value of the gift if you live in a high tax location like NYC.

Here is how I get to that math, using NYC tax rates:

less $50,000 for the tax benefit of the charitable gift deduction

less $38,000 for the capital gains taxes that do not have to be paid on the stock

So if you have highly appreciated publicly traded stock and are interested in giving to good causes, consider gifting stock instead of cash.

It is a great way to be generous.

The monthly match gang has been discussing doing a match campaign to help victims of Hurricane Harvey.

We are particularly interested in helping recent immigrants who are in need of relief.

We have not yet identified the right organization to support given where we want to focus but we hope to have one shortly.

In the interim, I donated to the GoFundMe Official Hurricane Harvey Relief Campaign.

If you would like to do the same, go here and make a donation.

I woke up Sunday morning in Europe to the news that our monthly match campaign for The Human Utility had crossed the $20k mark and thus our $20k match was fully funded. That was great news but then I saw this tweet from Tiffani, the founder of The Human Utility:

So that means that Jessica Livingston matched our campaign again. Which is incredibly generous but not the least bit surprising if you know Jessica.

So we raised over $60k from 171 different people to help people get the water turned back on in their homes this weekend. It feels great. I appreciate all of the donations from the AVC community that helped us make this happen.

We are in the midst of a monthly match campaign for The Human Utility which used to be called Detroit Water Project.

The founder of this effort, Tiffani Bell, explains the story of how this project came to be in this eight minute video;

If you want to participate in our match campaign after watching the video you can do so here.

And we are back with this month’s matching campaign to support a good cause.

We are moving away from the big well known causes to some lesser known but important efforts to help people who need our help.

We are going to start with helping people in need pay their water bills and keep clean water flowing to their homes.

The Human Utility helps almost 1000 families in Detroit and Baltimore pay their water bills and avoid a water shutoff.

We are going to match the first $20k of donations that anyone makes to The Human Utility between now and Sunday night (midnight PST). If we fully utilize this match, we will raise $40k which might get another 100 families their water back. That would be awesome.

To donate and have your contribution matched, go here and hit the big blue Donate button and make sure to tweet out your donation so we can match it.

Let’s get some water flowing again.

We are doing a $40k match offer this weekend for Earthjustice. It was $30k as of yesterday morning, but this tweet changed that number yesterday afternoon:

So what is Earthjustice?

It is an organization that pursues legal cases against those who are doing things against the interest of our planet.

Here are some examples:

These are just a small sampling of the legal work that Earthjustice does. You can read more here.

If not Earthjustice, who would file and work on these cases? The interested parties, the polluters, utilities, carbon industry, etc have massive balance sheets that allow them to work the system in their favor. Society needs well funded organizations to fight back for all of us. And that is what Earthjustice does.

Our match offer is good all weekend. If you want to participate, please do so today.

Here is how you can do that:

And please post this match offer [https://www.crowdrise.com/EJMatch] on social media and wherever else you might find people who want to support Earthjustice.