Audio Of The Week: A Decentralized AI Platform

My friend Gordon texted me this podcast and said “AI, blockchain, and homomorphic data. Trifecta!”

I gave it a listen and indeed some very interesting concepts are discussed in this one.

Then I recalled sending a text message to my son about the new Kendrick/SZA song from the Black Panther film and thought “Google saw that text message and added Kendrick to my interests.” I don’t know if that is in fact the case, but the fact that I thought it is really all that I am talking about right now.

That whole “why did I get this recommendation” line of thinking is what the machine learning industry calls Explainability. It’s a very human emotion and I bet that all of us have it, maybe as often as multiple times a day now.

Explainability is about trust. It’s important to know why our self-driving car decided to slam on the breaks, or maybe in the future why the IRS auto-audit bots decide it’s your turn. Good or bad decision, it’s important to have visibility into how they were made, so that we can bring the human expectation more in line with how the algorithm actually behaves.

What I want on my phone, on my computer, in Alexa, and everywhere that machine learning touches me, is a “why” button I can push (or speak) to know why I got that recommendation. I want to know what source data was used to make the recommendation, and I’d also like to know what algorithms were used to produce confidence in it.

This is coming. I have no doubt about it. And the companies that offer it to us will build the trust that will be critical to remaining relevant in the age of machine learning.

As has become my practice, I celebrate the end of a year and the start of a new one here at AVC with back to back posts focusing on what happened and then thinking about what might happen.

I went back and looked at my predictions for 2017 and I completely whiffed on the breakout year for crypto. I did not even mention it in my post on New Year’s Day 2017.

Maybe I got tired of predicting a breakout year for crypto as I had mentioned it in my 2015 and 2016 predictions, but whatever the cause, I completely missed the biggest story of the year in tech. 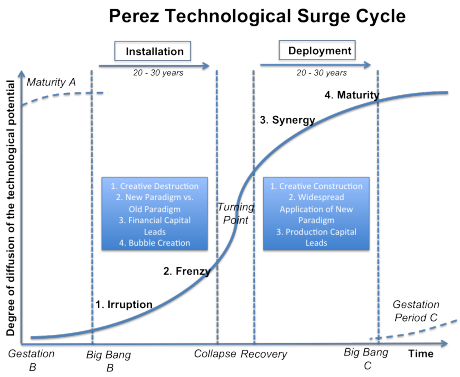 2017 is the year when crypto/blockchain entered the frenzy phase. Over $3.7bn was raised by various crypto teams/projects to build out the infrastructure of Internet 3.0 (the decentralized Internet). To put that number into context, that is about equal to the total seed/angel investment in the US in 2017. Clearly, not all of that money will be used well, maybe very little of it will be used well. But, like the late 90s frenzy in Internet 1.0 (the dialup Internet) provided the capital to build out the broadband infrastructure that was necessary for Internet 2.0 (the broadband/mobile Internet), the frenzy in the crypto/blockchain sector will provide the capital to build out the infrastructure for the decentralized Internet.

And we need that infrastructure badly. Transaction clearing times on public, open, scaled blockchains (BTC and ETH, for example) remind me of the 14.4 dialup period of the Internet. You can get a taste of what things will be like, but you can’t really use the technology yet. It just doesn’t work at scale. But it will and the money that is getting invested via the frenzy we are in is going to make that happen.

In the venture business, you wait for these moments to come because they are where the big opportunities are. And the next big one is coming. That is incredibly exciting and is why we have these ridiculous valuations on technologies that barely/don’t work.

The Beginning Of The End Of White Male Dominance:

The big story of 2017 in the US was the beginning of the end of white male dominance. This is not a tech story, per se, but the tech sector was impacted by it. We saw numerous top VCs and tech CEOs leave their firms and companies over behavior that was finally outed and deemed unacceptable.

I think the trigger for this was the election of Donald Trump as President of the US in late 2016. He is the epitome of white male dominance. An unapologetic (actually braggart) groper in chief. I think it took something as horrible as the election of such an awful human being to shock the US into deciding that we could not allow this behavior any more. Courageous women such as Susan Fowler, Ellen Pao, and many others came forward and talked publicly about their struggles with behavior that we now deem unacceptable. I am not suggesting that Trump’s election caused Fowler, Pao, or any other woman to come forward, they did so out of their own courage and outrage. But I am suggesting that Trump’s election was the turning point on this issue from which there is no going back. It took Nixon to go to China and it took Trump to end white male dominance.

The big change in the US is that women now feel empowered, maybe even obligated, to come forward and tell their stories. And they are telling them. And bad behavior is being outed and long overdue changes are happening.

Women and minorities are also signing up in droves to do public service, to run for office, to start companies, to start VC firms, to lead our society. And they will.

Like the frenzy in crypto, this frenzy in outing bad behavior, is seeding fundamental changes in our society. I am certain that we will see more equity in positions of power for all women and minorities in the coming years.

Although I did not get much right in my 2017 predictions, I got this one right. It was easy. You could see it coming from miles away. Tech is the new Wall Street, full of ultra rich out of touch people who have too much power and not enough empathy. Erin Griffith nailed it in her Wired piece from a few weeks ago.

Add to that context the fact that the big tech platforms, Facebook, Google, and Twitter, were used to hack the 2016 election, and you get the backlash. I think we are seeing the start of something that has a lot of legs. Human beings don’t want to be controlled by machines. And we are increasingly being controlled by machines. We are addicted to our phones, fed information by algorithms we don’t understand, at risk of losing our jobs to robots. This is likely to be the narrative of the next thirty years.

How do we cope with this? My platform would be:

2017 brought us many other interesting things, but these three stories dominated the macro environment in tech this year. And they are related to each other in the sense that each is a reaction to power structures that are increasingly unsustainable.

I will talk tomorrow about the future, a future that is equally fraught with fear and hope. We are in the midst of massive societal change and how we manage this change will determine how easily and safely we make this transition into an information driven existence.

Video Of The Week: Matthew Zeiler at Code Commerce

Matthew is the founder and CEO of our portfolio company Clarifai.

Here is his talk (11mins) from last week’s Code Commerce conference in which he talks about how to use AI to grow your business.

In this episode of This Week In Startups, Jason Calacanis talks to Richard Craib, founder of our portfolio company Numerai.

It is a mobile SDK that any developer can put into their mobile app and it will allow for machine learning on the device:

Machine learning (the process by which computers can get smarter through data examples instead of explicit programming) requires massive computational power, the kind usually found in clusters of computer servers in massive datacenters (ooooh, the cloud). This means that machine learning technology is usually only available to those who can connect to the cloud.

Not anymore! Clarifai’s Mobile SDK gives users the power to train and use AI in the palms of their hands by installing machine learning capability directly on their devices, bypassing the traditional requirement of internet connectivity and massive computing power. After all, these days we have tiny supercomputers in our pockets – our mobile phones. Starting with an iOS SDK, Clarifai is on a mission to make user experiences uniquely personalized on any device from your cellphone to your toaster, anywhere in the world.

Here’s a slideshow that explains how this works:

Back in February, I posted about Numeraire.

And roughy four months later, I am happy to write that the Numeraire token is live on the Ethereum blockchain.

You can read more about this here.

Using Your Data To Make Your Product Better

One of my favorite uses of AI is to use the data in your product to make your product better. I am talking about making a better UI using AI on your data.

Our portfolio company Quizlet did just that and wrote about it here.

They used the ~150mm study sets that their users have put into Quizlet over the last ~12 years to predict suggested definitions during the create study set mode.

I think this is super cool and a great way to make your product better.

Video Of The Week: Why Toddlers Are Smarter Than Computers

I saw Gary Marcus give a talk at the NYU AI Event I blogged about this past week. In that

In that talk, he suggested that Deep Learning wasn’t going to get us all the way to where we want to get in AI.

I thought it was an interesting take on AI, particularly right now when the buzz and hype is so high.

This TedX talk makes the same argument and so I am sharing it with you.

NYC is an emerging hub for AI and AI startups. That is because of the large number of mathematicians, scientists, and programmers trained in AI who work on wall street, because of leading institutes like NYU’s Courant School that work on cutting-edge science in the field, and because of a number of programs aimed at AI startups here in NYC.

A few weeks ago I was at the Future Labs AI Summit to hear about AI from Yann LeCun, Gary Marcus, and many others. Below is a short highlight video of the summit.

Here is a short highlight video of the summit.

The Future Labs at NYU Tandon are now accepting applications for the second cohort or the AI NexusLab to find AI companies to support.

Applications for the next AI NexusLab cohort close Wednesday, May 3rd and conclude with the next Future Labs AI Summit in November.

If you are and AI startup or you are familiar with any early stage artificial intelligence startups who you think could benefit from our program, please have them apply at www.nexuslab.ai/

Accepted companies receive
• $100K in funding
• An NYU student fellow for the duration of the program
• mentorship from leading AI faculty and industry experts
• Access to papers and academic research
• Access to data sets
• Partner opportunity to pilot partners (the last cohort included Daimler, Tough Mudder, Quontopian, and others)
• More than 400K worth of support and services.
• Present at the next Future Labs AI Summit (last speakers included Yann LeCun, Gary Marcus, and others)

The Future Labs are also hosting office hours this Friday, April 28th from 1:00pm-5:30pm for teams who have questions about the program at the Data Future Lab – 137 Varick Street, 2nd Floor.