What Christmas Means To Me

I really like Stevie Wonder’s song from the late 60s written by Anna Gordy Gaye, George “Horgay” Gordy and Allen Story. The song lays out what Christmas means; candles burning low, mistletoe, snow and ice, carols right outside my door.

I grew up celebrating Christmas and it was always a special time for me and my family. Decorating the tree, midnight mass, Christmas dinner, and gifts. I remember it fondly.

When the Gotham Gal and I decided to raise our family Jewish, I negotiated for and got Christmas. And for the many years, our family celebrated Christmas mostly the way I celebrated it as a child.

In recent years, with adult children and travel and many other things, celebrating Christmas has become optional. Some years we do it. Many years we don’t.

But Christmas retains a special place in my soul.

Christmas means family, it means winter (we got six inches of snow last night), and it means birth. A feeling of hope and optimism going into the new year.

As Stevie sings in that wonderful song:

I wish you merry Christmas baby

Oh and such happiness in the coming year, oh baby

That is what I wish for all of you and your families on this wonderful day.

Mankind has been inventing new ways to organize and govern since we showed up on planet earth. Our history is a gradual evolution of these organization and governance systems. Much of what we are using right now was invented in ancient Greece and perfected in western Europe in the 17th, 18th, and 19th centuries.

I have been thinking for some time that we are on the cusp of something new. I don’t know exactly what it will be but I think it will be inspired by the big technological innovations of the late 20th century and early 21st century and it will be based on decentralized and self-organizing systems.

The Internet is, at its core, a scaled decentralized system. Its design has been a resounding success. It has scaled elegantly and gradually to well over 2bn users over fifty years. No central entity controls the Internet and it upgrades itself and scales itself slowly over time.

Open source software development communities are also an important development of the past fifty years. These communities come together to create and maintain new software systems and are not financed or governed by traditional corporate models. The goals of these communities are largely based on delivering new capabilities to the market and they don’t have capitalist based incentive systems and they have shown that in many instances they work better than traditional corporate models, Linux being the best example.

And, for the past decade or so, we have seen that modern cryptography and some important computer science innovations have led to decentralized blockchain systems, most notably Bitcoin and Ethereum. But there are many more to study and learn from. These blockchain systems are pushing forward our understanding of economic models, governance models, and security models.

I think it is high time that political scientists, philosophers, economists, and historians turn their attention to these new self-organizing and self-governing systems. Maybe they have and I am not familiar with the work. If so, please point me to it. If not, maybe this post and others like it will be an inspiration for the liberal arts to catch up to the computer scientists and mathematicians or at least work closely with them to figure out what is next, to articulate it and put it in the context of other governance and economic systems. From that work can come progress that mankind needs to move beyond the current systems, which work, but have many flaws and are becoming stale and in need of an upgrade.

Yesterday, my partners and I invited Paul Romer over to USV for lunch. For those that don't know, Paul is a leading thinker in the world of economics and currently a Professor at NYU. It was a fascinating conversation. My favorite part of it was Paul's "lecture" on William Penn, early Pennsylvania, and the reaction to the growth of Pennsylvania from neighboring states.

William Penn was a Quaker and when King Charles II gave him a large piece of his land holdings in America, Penn created the colony of Pennsylvania and grounded it in the notions of tolerance and religious freedom. Instead of limiting Pennsylvania to Quakers, they welcomed all comers. And the result was that Philadelphia became the fastest growing city in America with a vibrant economy and lifestyle.

The neighboring colonies, which were initially centered around a single religion, reacted to Pennsylvania's and Philadelphia's economic success by opening up their cultural norms and becoming more tolerant as well.

Paul told us this story as a lesson in why cultural norms, even more than laws, are a determinant of prosperity and economic development. And tolerance is one of the more important cultural norms in this regard.

Bob's argument is as much an economic one as a social one. Bob says:

This proposed amendment to our state constitution is specifically telling them we don’t want their friends and fellow Americans to come here.   We need these talented, intelligent young Americans to come to North Carolina to help our technology industries succeed, but they have choices.   They can go to states with mottos like “Live Free or Die” instead of states that attempt to tell them how to live their lives, such as this Amendment One does.  And trust me, these bright young Americans can and will chose to join my competitors in Seattle, or San Jose, or New York.

North Carolina has enjoyed a vibrant tech/startup economy and Bob's Red Hat and Lulu.com are two of its best known successes. Bob asserts that changing the cultural norms (and laws) of his home state are not going to be good for the local startup scene. Bob is right and his concerns are consistent with the lesson that Paul Romer gave us yesterday.

Tolerance and Prosperity go hand in hand. History tells us this. I hope the good citizens of North Carolina listen to Bob because I agree with him strongly on this one.

Swimming In The Cross Currents Of Religion 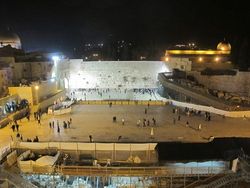 It's Christmas Eve, Friday Prayers, and Shabbat all on a single day today in Jerusalem. And I'm here with our family to soak it all in. We spent the day in and around the Old City and it was a special experience.

I'm not much for organized religion. I was raised a Catholic and we have raised our family Jewish. I'm not a believer but I do have an appreciation for the practice of religion. I've witnessed the joy and solace that my mom's faith gives her every day. And I've experienced the pride of watching my three children reading from the torah on their bar and bat mitzvahs. And I've seen the comfort that rabbis and priests have given to greiving families in their moments of pain and suffering. I understand and appreciate the role of religion in the world and am thankful for all the good it does for so many. I also abhor all the bad it does in so many places.

We got a tour of the Old City last night from a wonderful guide who was deeply spritual and he said this about religion, "it is the practice that counts, not how they practice." I buy into that line of thinking and am still trying to figure out how I practice. Writing every day is certainly part of my practice. But not all of it.

I enjoy swimming in the cross currents of religion. I don't buy into any one orthodoxy. In fact I think ortohodoxy is dangerous. But I have taken particular note of certain aspects of each of the religions I have come into contact with and appreciate them and maybe even practice them from time to time.

So I found today in Jerusalem very moving and enjoyed it very much.

Merry Christmas to everyone who will be celebrating Christmas tonight and tomorrow, including my mom, dad, and brothers and their family.