There was an interesting conversation in the comments to my Retention post that I thought I'd highlight. 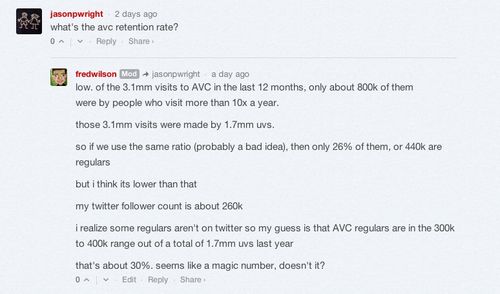 I can't figure out how to look at frequency and recency data in google analytics by UV as opposed to total visits. So this analysis is probably flawed. If anyone knows how to do that, please let me know in the comments.

But assuming the analysis is not totally flawed, the loyal readership of AVC is between 200k and 400k out of a total of 1.7mm unique visitors last year.

That means only 10% to 25% of the total visitors are regulars. That's not particularly great retention from what I can tell. But I sure do appreciate all of you loyal readers.

A 2011 Retrospective On The AVC Community

This isn't really my blog anymore. I still get to decide what the topic of the day is. But the conversation here at AVC is what makes this place special. So, here are the highlights of 2011 (based on disqus and google analytics from Jan 1 to Dec 31):

– Most liked comment: Seth Godin calling bullshit on my marketing post with the line that "marketing /= advertising". That was liked 208 times, 2.5x the second most liked comment this past year.

– Most repied to comment: Andy Swan asking the OWS crowd "What is the negative effect on you when another man earns much more money than you do?  Why do you care?  Why do you not applaud his success?" Andy is the Howard Roark of this community and thank god we have one.

– Most active thread: No surprise there. Occupying My Mind with 990 comments. I'm tempted to re-open the comment thread and post 1o more comments.

– Most liked community member: No surprise there either. Our very own robot dinosaur. Don't ever change grimster.

It was a great year here at AVC. 4.2mm visits, 58,000 comments, and untold insights, friendships, and chuckles.

About a month ago, William Mougayar, an AVC regular if there was ever one, emailed me about an idea he had to create a web service to make social conversations easier. We went back and forth on the idea. I pushed him to come up with a simple name and a simple UI. I told him "make it like gmail for social conversations."

Over the past month, he and his crack team of something like two or three developers did just that. And today, I'm pleased to tell all of you that William and his team have built something pretty special.

He calls it engag.io. It's a good name. An io channel for social engagement. Here's what my engagio inbox looks like this morning:

My inbox is dominated by AVC discussions. For most people, their inbox will have a multitude of conversations from many services; Twitter, Foursquare,  Hacker News, Facebook, and hopefully AVC too.

William's got a blog post up on the engagio blog explaining his vision for the product. It's a good read.

Engagio is offering 100 invites this morning to AVC readers. The first 100 users will get in. The invite code is avcengage (lower caps). Give it a try and let us know what you think.

Just In Case You Were Wondering: Neither me nor USV has any financial interest in engag.io or eqentia, it's sister service.

The Story Of My Avatar

I saw this tweet when I got up this morning:

hey @fredwilson – whats the story behind ur avatar?

While longtime readers know it, I figure many of you don't. So here it goes.

Starting about four years ago, Howard Lindzon started commenting actively on this blog. He was funny, he was smart, and I enjoyed our banter in the comments.

One march vacation, our family made a short stop in Phoenix, where Howard used to live. He emailed me and offered my son and me two tickets to the Suns game. We took him up on that and that's how we met for the first time.

It turned out Howard was hatching an idea for a web show for investors. Think Rocketboom meets Jim Cramer. I told him it was a good idea and encouraged him to do it. Howard would fire ideas at me and I would give him feedback on them.

Out of that came Wallstrip. Here's a post I wrote a little over three years ago announcing the launch of Wallstrip.

One of the original ideas for the show that never really worked out was that there would be a dozen well known bloggers who would write short posts about each daily show. Howard asked me to do that and I agree to do it at least once a week.

So that's how the avatar came to be. Howard asked his friend Jenny Ignaszewski to draw up avatars for all dozen of the stock bloggers using photos of them that were available on the web. The first time I saw my avatar was when Wallstrip launched and there it was along with Howard's and a bunch of others.

From the minute I saw it, I liked it. It uses my favorite color (green) as the backdrop and the eye color (my eyes are sometimes blue and sometimes green and sometimes something else). It looks like me, but not too much.

So I began to use it a bit here and there around the web as I set up new profiles. But by no means was it the only profile picture I used. For corporate oriented services like LinkedIn, I'd use my Union Square Ventures headshot. For social nets like Facebook, I'd use a regular headshot. I used a photo of me taking a photo on Flickr for a long time.

But then I started to realize that the Wallstrip avatar was becoming my online identity. People would comment about it all the time. Around the time we sold Wallstrip, Howard asked Jenny to do a real painting of it which I now have in my office at Union Square Ventures. It's a real conversation starter.

Sometime in early 2008, I just decided to go with it everywhere. It's at the top of this blog and everywhere else I have an online identity. It's my online brand now.

Like this blog, this was not planned. It just happened. That's the way most of the important things in my life have come to be.