I tried out a new service this past week called Gmail Meter. It's a free analytics service that tells you stuff about how you use Gmail. It is brought to market by the folks at ShuttleCloud, which does archive and data migration for cloud services. It's a way for them to get to know folks who might become ShuttleCloud customers in the future.

I learned a few things. I get 6,470 legit emails a month from 1293 different senders. I send/reply to 2,676 emails to 777 people. So the send/receive ratio across my inbox is 41% which is higher than I thought. I feel a tad better. But there are also at least 516 people who sent me an email last month that did not hear back from me. That makes me feel a bit worse.

The single highest send/reply ratio in my world is the Gotham Gal who sent me 133 emails of which I replied to 100, for a 75% return rate. I've got work to to do there. Sorry Jo. My partners Albert, Andy, Brad, and John get between a 50% and 70% reply rate. Sorry USV folks. The one cohort that I send more mail to than I get replies from is my three kids. I get a worse response rate from them than all of you get from me. Not sure how I feel about that.

This chart will not surprise anyone here at AVC but it does show that the one time I reply to more email than I get is the 5am to 7am time frame. 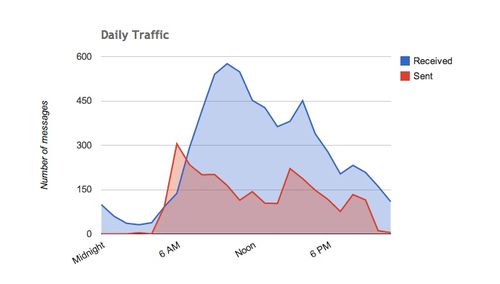 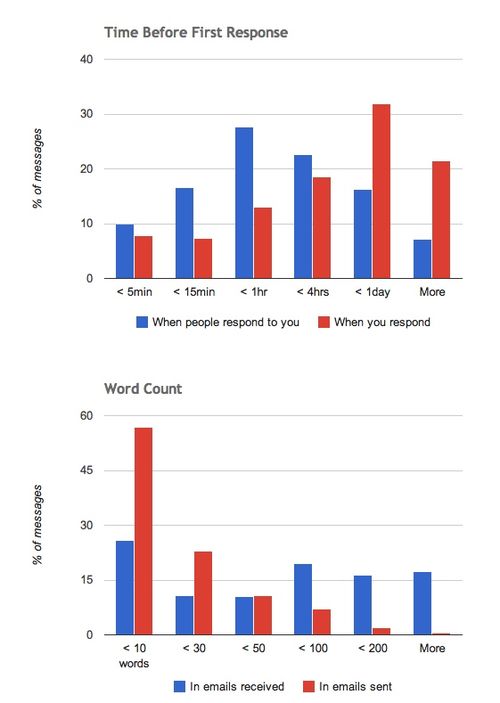 The first chart shows that I get to most of my email within 24 hours but there is certainly a meaningful percentage that takes longer.

The second chart shows that I send a ton of short emails. 80% of my email is less than 30 words. Whereas greater than 50% of the emails I get are longer than 100 words.

I've asked the Gmail Meter folks to add a chart showing reply ratio on emails less than 30 words versus emails greater than 100 words. When I get that chart I will publish it here because I think that is single best secret to getting a reply from me.

Anyway, I found this data valuable. Maybe you will to. You can try it out at Gmail Meter.

I love gmail priority inbox. I can't imagine doing email in an email client that doesn't have this feature. For those who are not familiar with priority inbox, it's a feature that splits the gmail inbox into three sections.

The top section is your "priority inbox." Google tries to figure who are the most important mail senders to you and it puts their mail in the top section. You can and should train it by using the +/- buttons to identify who is actually priority and who is not.

The middle section is the emails you have starred to return to later.

The bottom section is "everything else." For me this is mostly mail I don't want or need but it not technically spam. I do a quick scan of my "everything else" mail every day or two and pull the one or two emails out of it that I want and then delete the rest.

Now that we've gotten through what priority inbox is and why it works so well for me, I'd like to suggest a new feature to the gmail team. I'd like a "super priority inbox" which would be a fourth section on the page and above everything else. I'd enter the email addresses of a couple dozen people who I always want in my super priority inbox.

I know you can do this with filters and labels. I've done it. But the layout of the main inbox page in gmail is powerful. If I have to click over to a label to get to a filtered view, I just don't do it regularly.

UPDATE: Seems like this may be supported already. I got this comment below. I will try it out later. So excited.

There is a section called priority inbox sections:

You can set the first to be the label that you have predefined, second to be important, 3rd starred, and 4th everything else.

The Impact Of Priority Inbox

I've been using Gmail's Priority Inbox for a while now. I like it very much. But it has one impact that is worth pointing out.

If your email gets into the third section of the main page, called "Everything Else", I most likely won't see it unless I see it on my Android phone. And hopefully Google is working on bringing Priority Inbox to Android. When that happens, I won't ever see it.

Everything Else is like the spam folder with one exception. The email will come up in the search results.

This may not be everyone's use case. I get a lot of email and I can't get to all of it regardless of what email client I use. Other Priority Inbox users might actually read through Everything Else. But I don't and can't.

The email deliverability business, where we have an investment in the market leader Return Path, will be impacted by Priority Inbox and related services. Deliverability will increasingly mean getting into the Priority Inbox. And that's a hard thing to do.