One of my favorite features in Chrome for Android is something called "link preview." When you touch a part of a web page with a lot of links on it, you get a popup that looks like this: 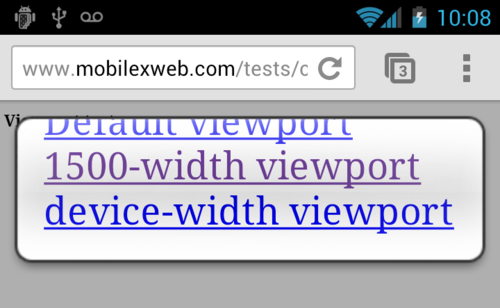 That popup allows you to select the exact link you want. It is awesome.

However, it doesn't work on all websites. I am not entirely sure what is required on the website side to power this feature, but, for example, I can't get this feature to work on Hacker News where it would be awesome. It's entirely possible that I am doing something wrong. If so, I'd love to know what.

But this works on most websites I use and I have found it to be a very handy feature. I suspect it will become standard on mobile browsers, particularly on smartphones.

We've been talking a lot about mobile here lately and in one of those discussions, someone suggested we share our home screens with each other. I figured that would make for a fun friday. 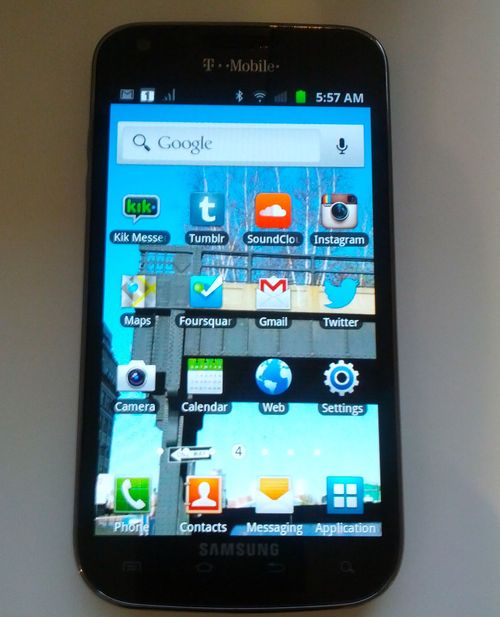 Oh, and that's the start of The Highline at Gansevoort and Washington in the background.

This is a T-Mobile Samsung Galaxy. I am actually in the process of switching to a Galaxy Nexus running Jelly Bean and will switch to a Chrome Browser and the home screen might move around a bit. But this is what I've got right now.

To play this fun friday game, take a photo of your home screen and attach it to your comment in the thread below. And add any color commentary you'd like to add. This should be fun.

Browser Loyalty (or not)

I guess this weekend will be google analytics weekend, given my post yesterday and today. In light of the rumors that Facebook may purchase the Opera browser, I got to thinking about how quickly browser market shares move. If the AVC blog audience is a good sample, then the answer is pretty quickly.

Here's the breakout of browser market share on AVC in the month of May 2006:

IE was dominant with over 60% of the AVC audience using it in May 2006. Firefox was coming on strong and Safari was tiny with about 5% of the users.

In just two years, the landscape had shifted rapidly.

In May 2008, Firefox was ascendant and over half of AVC readers used it. IE was still popular and Safari had doubled its share among AVC readers.

Two years later, in May 2010, the market was shifting again.

Firefox was still on top but was falling and Chrome was taking share from it. Safari had doubled again, and IE usage was in freefall.

And fast forward to today, we see a different story again.

Chrome is by far the most popular browser among AVC readers. Safari and Firefox usage has declined a bit. And IE contnues its decline.

All of this share shifting has happened in the relatively short timeframe of six years. There is apparently very low loyalty to browsers in the AVC community. I suspect our crew here is more likely to try something new and shift than the broader Internet, but even so, this is something to think about if owning a browser is part of your lockin strategy. Apparently that doesn't work too well.

At some point yesterday, I was in the chrome browser (which is basically my OS these days) and I hit Edit, Copy URL, and I realized that I must do that dozens of times a day. Grabbing links and sharing links is possibly the most common thing I do from day to day.

And now with the latest build of Android, when you hold your finger over the address bar in the android browser, you are given the option to Copy URL. Since discovering this feature recently, I do it on my phone dozens of times a day as well.

Android also has the "share page" feature which will let you send the URL of the page you are on into any app on your phone that can take a URL (Twitter, Facebook, Tumblr, Kik, gmail, text, etc, etc, etc, etc, etc, etc).

This isn't an advertisement for Chrome and Android. I'm sure most modern browsers offer this feature. And I suspect that iOS supports this feature too (although I don't believe it offers the "share page" feature that android has).

This is just a recognition that URLs/links are the lingua franca of the web and every app, web or mobile, should make capturing them and working with them as drop dead simple as possible. I certainly appreciate this feature and I suspect all of you do as well.

I was talking with my partner Albert and my friend Matt the other day. I was saying that the thing I miss most about flying without wifi is the ability to clean out my inbox. And Albert said that he'd always know when I had landed because his inbox would get a flood of incoming email from me. Matt laughed and said he was well known for doing the same inside his company.

I think I am going to fly across the country today without wifi so I'll get the opportunity to clean out my inbox and I'm going to use a relatively new feature to do that.

Google has released a Chrome app for offline gmail. It allows you to load gmail in Chrome when you are offline. When you do that, it looks like this:

I've had this app installed in Chrome for a few weeks now but I've not had the chance to test it out. I think I'm going to get to do that today. I'm curious if any of you are using offline gmail and if so, how well it works.

Yesterday I read a great post by Gabriel Weinberg, the founder of DuckDuckGo, on how he got DuckDuckGo into Time's top websites of 2011. I just loved the way he talked about what he did and shared the strategy with everyone else. So I decided I'd make DuckDuckGo my default search engine for the next month or two and see if I miss Google.

But since I use Chrome and just type whatever I'm looking for right into the address bar, I needed to change the default search engine. Happily DuckDuckGo told me how to do it. You learn something new every day and I learned this yesterday:

1 – When in Chrome, put the cursor over the address bar, doesn't matter what address is in it, and right click. You'll see a few choices, select "edit search engines"

2 – Then scroll down under "other search engines" and find the one you want to switch to and hover over it. There will be a button that says "make default". Click that.

3 – you are done. start searching in Chrome with a new search engine.

I think it might be nice to go back to a search engine that doesn't do anything other than search. DuckDuckGo seems to be exactly that. So I'm giving it a shot at my search business.

For the past few months, I've been keeping two browsers open at the same time, Firefox and Chrome. I use Chrome for Gmail and other web apps where speed is of the essence. And I use Firefox because I still like having my extensions available to me. It's a pain in the ass to be honest. I'd really like to move entirely to Chrome, but I need my extensions.

Well this week is a big one because according to MG Siegler, Google is going to launch extensions for Chrome this week. It may happen at the Add-On Con which is happening the end of this week in Mountain View. Add-On Con was organized in part by our portfolio company Get Glue, which offers the Glue add-on, one of the browser extensions I can't live without.

Speaking of extensions I can't live without, here's my list:

I hope all of them will be available for Chrome asap. I know for sure that Glue and Zemanta will be ready to go this week.

Unfortunately for me, extensions won't be available for Chrome for Mac right away. So I'll be using two browsers for a while more.

UPDATE: Zemanta updated their browser extension today. Here is the blog post explaining the new features and here is the extension.