Four "Appearances" In One Day

A few weeks ago Gillian, who keeps me on schedule and a lot more, said to me, "there's a day coming up when you are going to do four appearances in one day." I thought to myself that was a bit much but didn't do anything about it.

Yesterday was that day. I gave talks at Baruch College, Google Hangouts/YouTube, Skyped into an entrepreneurs meetup in Milan Italy, and ended the day talking to the Kauffman Fellows Program at the Alexandria Center in NYC.

The thing I learned yesterday is that sitting at my desk and talking to folks around the world, via the power of Google Hangouts and Skype, is an amazing thing. Of course I've been using these tools for a long time. But yesterday was still a bit of a wakeup call for me.

The Google Hangouts/YouTube thing was a MOOC called Entrepreneurship in Education that is being taught by David Wiley, Todd Manwaring, and Richard Culatta. It was an hour long back and forth on the issues around entrepreneurship in online education. Ki Mae Heussner posted about the class on GigaOm yesterday. Here's the video of the conversation.

The really awesome part of this class is the way that Google Hangouts allows you to have a small interactive group talking about things that is then broadcast to a much larger group. I am going to try to replicate that in my final Office Hours next monday in my Skillshare class.

The Skype into the meetup in Milan was equally awesome. I don't have the video of that to share but here's a twitpic that I saw on Twitter after my talk that gives you a sense of how the folks in Milan experienced it: 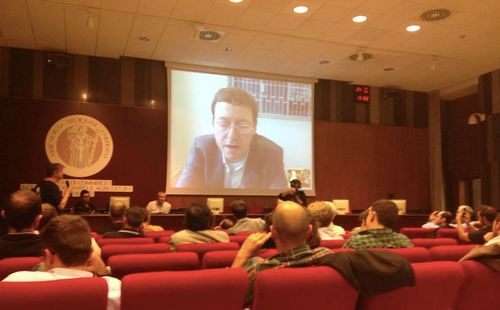 As much as I enjoyed the talks I gave at Baruch and the Kauffman event, it was the talks that were delivered online that excite me more. Because online video allows me to talk to folks around the world. And I think that takes the conversations I want to have to a much broader audience and hopefully helps people all around the world think differently and ultimately act differently as they bring their ideas to market.