The utter simplicity of the iOS home screen is Apple’s innovation. It’s the simplest, most obvious “system” ever designed. It is a false and foolish but widespread misconception that “innovation” goes only in the direction of additional complexity.

"Designed" being the important word in that quote. Because we aren't done designing user interfaces. I think we are just getting started.

This piece in Wired got my head nodding because I am experiencing it every day on my Android phone. I find myself typing less and less on Android because the voice recognition is so damn good. And the type ahead prompts are like reading my mind. Instead of typing, I find myself selecting the next word more often than not.

Machine learning is the key innovation here. And in that area Google is so far ahead of every big company (and most small companies) that it is hard to imagine how they are not going to out innovate on the emerging user interfaces of our mobile future (glasses, watches, etc, etc).

Cheap Will Be Smart. Expensive Will Be Dumb.

Technology is moving very fast these days. Look at the latest iPhone 4s. It has Siri in it. Look at the latest Android Galaxy S II. It has NFC and Bluetooth 3.0 in it. And these phones will be leapfrogged in 12-18 months with something even more amazing. Furthermore, these devices have open marketplaces for apps and APIs and SDKs that allow those app developers to bring new experiences to these devices every day.

Contrast that with cars, boats, refridgerators, air conditioners, TVs, and other devices which we are led to believe will become "smart" in the coming years. These devices are usually owned for somewhere between 3 years and 10 years by most consumers. The upgrade cycle for these devices is too long to allow most consumers to experience the kind of smarts on these devices that they are experiencing on their cheapest devices with shorter upgrade cycles.

And that's why technologies like airplay, DLNA, and similar approaches are so important. When smart and cheap devices can take control of expensive and dumb devices, we will see the dumb devices become smart.

When I got the SoundCloud app on my iPad and I airplayed into my sonos, it was one of those "I get it" moments. Every time I get into my car these days, I want to airplay into my car audio system. The idea of connecting via an aux jack seems so nuts.

I don't expect the makers of expensive devices to accept this idea quickly. It goes against the grain. How can my expensive device be dumb when one of those cheap devices is so smart? But I'm certain that this is the way the market will play out over time.

Bridge technologies will play an important role for a while. As will Apple's licensing strategy for airplay. Airplay could become a standard if it is broadly and cheaply licensed. Otherwise, we will see other technologies in this market. We may anyway because there are other issues that matter, like the ability to connect over a cellular data connection instead of a wifi connection, latency, and a number of other important features.

Regardless of timing and the technologies that get us there, I have no doubt that the way we will make our expensive devices smart will be via our cheap devices. That's how I am viewing the market opportunity these days. It's a very crisp and clear vision. And that's a good thing when you are trying to peer into the future.

It's Black Friday, the biggest shopping day of the year. But you don't have to get crushed by the crowds stampeding the doors in order to participate in this shopping crazed day.

You can take out your mobile phone and do your holiday shopping while you are sitting in the park, on the beach, or by the pool.

Consider the new Etsy iPhone app, for example. Download it to your iPhone and shop away. 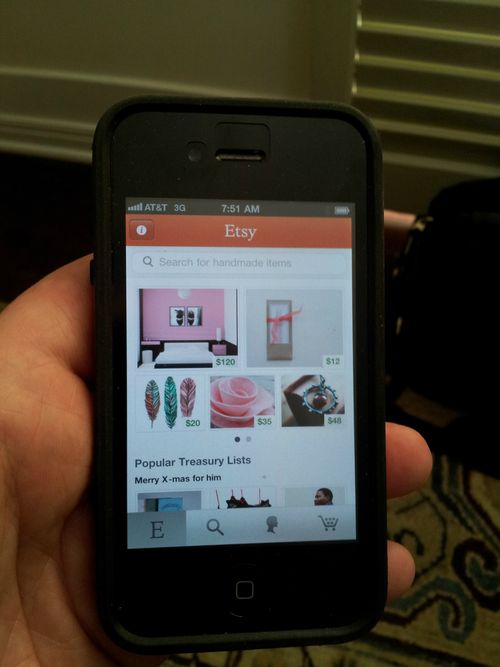 The treasury lists make a great way to shop on mobile. Here's a treasury called "Merry X-mas for him" 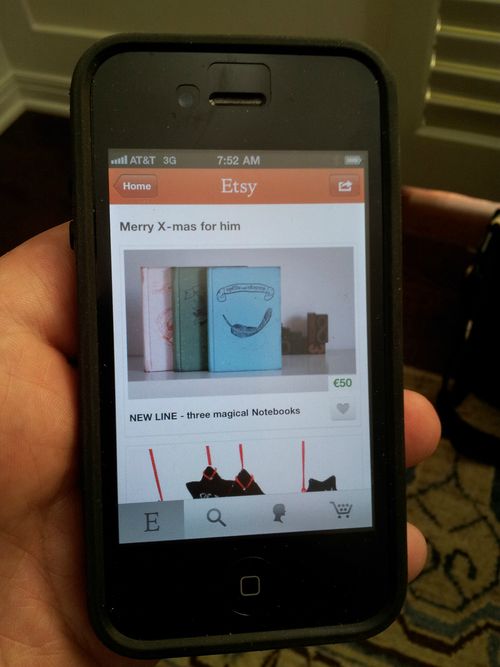 And if you find something you like, you can purchase it right on your phone:

So if you want to participate in Black Friday mania from the comfort of your couch watching football games, try shopping on your mobile phone. It works nicely and you aren't likely to get trampled.