It's no secret that USV invested in Hailo at the end of last year.

What is less well known is why we would do that.

Hailo announced the financing today and also a bunch of impressive hires for their US and Asia operations and they also disclosed a bunch of numbers for the first time.

Hailo is as big in their home city (London) as Uber is in SF and across the ten markets they are in, Hailo has similar scale as Uber in total transactions per day, week, month, and year. Hailo is different than Uber though. They focus exclusively on the regulated part of the market and as a result they can offer lower prices and a higher liquidity of cars to their riders. The power of this model becomes clear if you travel to London and compare the Uber experience to the Hailo experience.

Another big factor in our investment process was the "I told you so". In late 2011 as Hailo was just launching in London, the team came to see us and told us everything they planned to do in 2012. We were impressed by the team, their backgrounds, and their attitude and energy. But we had big concerns about everything they said they were going to do in 2012. A year later, they came back to see us and not only had they done everything they said they were going to do, they actually did a few things more than that. I referenced this story in a post I wrote at the end of last year. Now the company in the story has been named. They will be added to the investments page on usv.com today.

And maybe most importantly, we believe in large networks of users that have the power to transform big markets. We've long thought that the ubiquity of the smartphone will enable transactional networks between buyers and sellers and it turns out the urban transportation market is one of the first big markets that is rapidly being transformed by large smartphone networks. We are excited to be able to invest in one of them.

We sat down in the family room and tuned into the Opening Ceremony last night. And out came the Nexus 7. The second screen. I launched Twitter to see what folks were saying and found tweets talking about the event in the past tense. And then it occurred to me that we were watching on a tape delay. Of course we were watching on a tape delay. The opening ceremonies had happened in London in the evening which was friday afternoon New York time.

And now I'm thinking of the big events. Football, Basketball, Gymnastics, Swimming, Track & Field. Are these events going to be on tape delay too? Am I going to find out that Michael Phelps won his 19th medal on Twitter or on TV?

That's the challenge for NBC and all broadcasters who are carrying the Olympics. I vote for a live TV schedule and watching the games on my computer at work over a tape delay and the information coming at me before I can see it happening with my own eyes.

I think tape delay is a goner in the age of Twitter. I just don't know when the folks who make these calls will figure that out.

Fun Friday: What Is Your Favorite Summer Olympics Event?

The opening ceremony is tonight. The London Olympics are upon us. 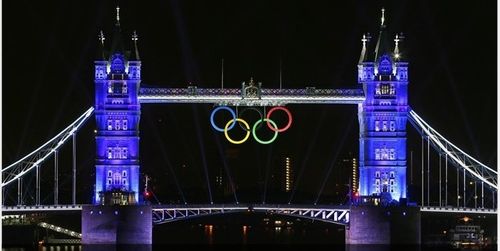 So I thought it would be fun to talk about everyone's favorite Summer Olympic sport.

For me, it's men's boxing. I really enjoy amateur boxing at the highest level. The athleticism of boxers always impresses me and there's a primal thing to the sport. So when men's boxing is on the next two weeks, I will do my best to tune in.

What is your favorites Summer Olympics sport?

I've been in London all week.

When I arrived at Heathrow I bought a data only SIM in the vending machine in baggage claim.

My friend Simon suggested I set up a new Skype account and get a UK SkypeIn number.

I did that and I have been operating without a voice connection. I use skype for voice, Kik for text, and evrrything else works just fine on data.

It's a pretty sweet lifehack. Give it a try the next time you are on the road out of your home country.

Discuss on Twitter
View Discussions
#Blogging On The Road
May 15, 2012

One of the most exciting areas of Internet applications these days are applications that are "mobile native". That doesn't just mean mobile first. It means mobile native – the app could not exist if the mobile smartphone didn't exist.

A great example of this is the "book a cab ride on your phone" category. The leader in this category is Uber which does a great job and really nailed the experience. I've also used SideCar in San Francisco and Hailo in London. All three are great experiences.

These services work so well because the cab driver and the passenger both have mobile phones that are geolocated. The application matches up driver and passenger in real time and handles payment as well. That's a killer experience.

When thinking about new mobile app categories, we like to think about these mobile native services. They are very powerful.

I'm off to Europe today for a week of board meetings and vacation. It has become a bit of a tradition in our family to spend some time in europe every summer. Last summer we spent close to six weeks in europe in four countries. This summer it will be only one week in two countries.

I've written about the Internet startup sector in Europe a fair bit. I'm bullish on the Internet startup sector all over the world but Europe is closer to NYC than most of the rest of the world, both in terms of how long it takes to get there and also in terms of culture, language, and a host of other things that matter in the relationship between entrepreneur and investor.

We don't have an office in Europe and we can't be on top of everything that is happening there. We are more reactive in our European investments than proactive. SoundCloud is a good example. I first met the team at LeWeb in 2008. We missed on the first VC round and didn't get involved until after we'd met with the team three or four times over a couple years.

Europe will likely never be a larger percentage of our portfolio than it is now (between 10-15% by names and dollars). But it is a place where interesting companies are getting started. And I'm eager to get over there and take the pulse of things.

I'll be blogging as usual. It might be lighter than usual. We'll see.

Some Thoughts On London On Our Way Home

We are heading back to NYC today. The Gotham Gal has been in Europe since July 4th. Our kids have been here for parts of that stay. I have been here for most of it with one trip back to the states in the middle of the month. The Gotham Gal has been travel/food blogging the entire trip and there is a treasure trove of advice on Rome, Tuscany, Zurich, London, and Normandy on her blog for those interested in visiting those places.

Our family rented an apartment in London and my daughter Emily did a program at Central Saint Martins the past month. The rest of us tagged along for parts of the trip.

I was able to get a fair bit of work done over here. I'd like to thank the people at Index Ventures who provided me an office, wifi, and a few lunches too. I enjoyed doing meetings at VC hangouts like The Wolesley and The Soho House. The Wolesley reminds me of Balthazar and I vastly prefer the London version of The Soho House to its NY cousin.

Speaking of cousins, London feels like NYC's cousin. The cities are very similar in many ways. The language, the culture, the nightlife are all close to each other. It's easy to live here if you live in NYC.

But there are some interesting differences. The most striking is the Middle Eastern, Russian, and Indian wealth that is resident in London these days. I was walking up Bond Street in Mayfair one afternoon by myself. I was walking faster than everyone else and passed at least a dozen groups in a four or five block span. And I noticed that hardly any of those groups were speaking english. When you walk into the most expensive stores, there aren't many brits or americans in them. But they are full of people from countries to the east of europe. It is a stark reminder of where the wealth is being created in the world today.

I believe the tech scene is alive and well in London and growing throughout much of Europe. I covered a bit of this in my post on Seedcamp. London feels like NYC did five years ago. There are a bunch of strong entrepreneurs and startups but the investment community is still pretty thin and there aren't enough active angels. Like NYC, London entrepreneurs are commonly recruiting engineering talent in less expensive locations and there are plenty of those places a few hours plane time from London.

Throughout our month in Europe, I was using Foursquare to checkin. Since we left NYC on July 4th, I've checked into 133 locations in five countries (including my trip back to the states). That's roughly four checkins per day. I have found that Foursquare is actively used in Europe. We found checkins and mayorships in almost every venue we visited. However, it is much easier to gain mayorships in Europe. I have no mayorships in the US right now but I have accumulated six while we've been in Europe.

I really love the ability to map my checkins that I blogged about a few weeks ago. Our apartment was in Mayfair but we traveled all around London while we were here. And yet, you can see that my checkins are very much centered around Mayfair and Soho. 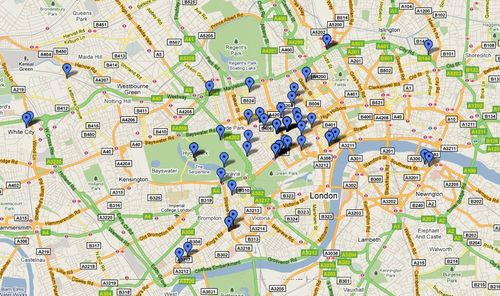 We are excited to be going home. We've missed our apartment, our beach house, our friends, and most of all our dog Ollie. But we really enjoyed our time in London. I hope to be back soon.

Discuss on Twitter
View Discussions
#Blogging On The Road