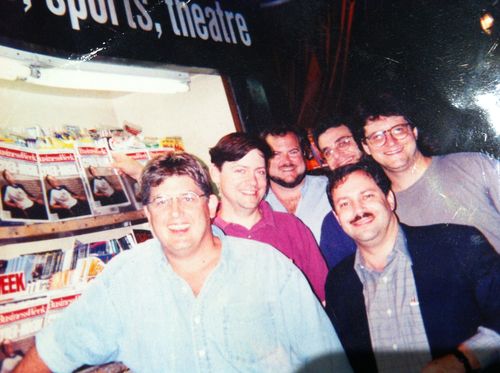 I absolutely love Paul Graham's story of how Y Combinator started. It has all the makings of a great startup story. Paul and Jessica came up with the idea on the way home from dinner walking through Cambridge. The sand in the oyster was the fact that Jessica hated her job.

It made me think we should share startup creation stories today on fun friday. I will start with mine.

It was 1996, I was restless in my job as a Partner at Euclid (do all startup stories start with a job thing?). My friend Mark Pincus said "you should start a venture capital firm." I said, "I'd like to do that but who would be my partner?" Mark said "Jerry Colonna of course."

So I reached out to Jerry. We arranged a dinner for us and our wives. I left the Gotham Gal inside with Jerry and Barbara while I was on the phone helping with the negotiation of the sale of Mark and Sunil's first company Freeloader. It was rude, but what was I going to do? That was a big deal for me. Fortunately the Gotham Gal closed the deal with Jerry for me.

On the way home across the Throgs Neck Bridge, I asked the Gotham Gal what I should do. She said "go for it." And so we did.

Do you have a fun startup creation story? If so, please share it with us in the comments.

I interviewed Dennis Crowley yesterday at the NYU Entrepreneurs Festival. I tweeted out the livestream so I'm sure some people were able to catch it live. I hope they put the video up soon because Dennis was great and I think people will get a lot of value out of his thoughts on entrepreneurship, startups, and building a product and a company.

But this post is about something Dennis said about product roadmaps that really struck me. Dennis said that all the way back to Dodgeball, the predecessor company to Foursquare, he and Alex had a roadmap for the product that was years ahead of what they could actually build. When Dennis and Naveen decided to start building Foursquare, Dennis pulled out that roadmap and updated it to reflect the power of modern smartphones. And that roadmap goes way out, well beyond what Foursquare is today or what it will be in a year from now.

So when I asked Dennis about the moment when the Foursquare team watched the Facebook Places announcement, he said "I got up and told the team that any company can copy what we have built, but we just have to go on and build the things we want to build because nobody else has that roadmap."

That is the power of a visionary founder leading a team to build the things that are only in his or her mind. I recall Mark Pincus, in the early days of Zynga, tell me about a game he wants to build someday. Zynga still has not released that game. When Jack Dorsey came back to Twitter, he said he was finally going to build Twitter 1.0. Think about that. And think about what Twitter 5.0 is in Jack's mind.

The best founders have these long roadmaps.  If they can stay engaged in their companies, they can realize them over extended periods of time. There are so many reasons why this doesn't always happen. Founders leave. Companies are sold. But when it all comes together, the result is magical.