I got an email from my friend Robin Chan this morning. He's in Beijing and attended a hackathon sponsored by our portfolio company 10gen (developer of the open source datastore MongoDB). He said the developers in Beijing were showing their love for Mongo and building some great web apps with it.

That caused me to run a Google Trends analysis on MongoDB and this is what it shows (click on the image to see it in a larger format):

The top regions for searches on MongoDB are Russia, South Korea, China, Ukraine, Sweden, Israel, India, and then the US. The top cities are Beijing (Robin was right), San Francisco, Moscow, Shanghai, Stockholm, and NYC. The top languages are Korean, Russian, Chinese, then English.

When people ask me what the biggest trend on the web is, I tell them globalization. Web services are being used globally and they are increasingly being built globally. There is no place in the world that has a lock on talent, ideas, and execution. Web development is a global phenomenon. 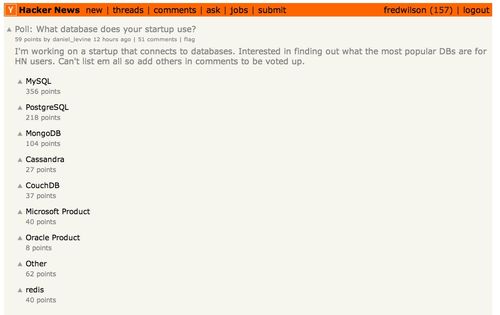 Hacker News is a very specific community and so by no means is this poll representative of the entire software engineering community, but I am so proud to see Mongo up there as the top non-sql datastore.

MongoDB has recently added a couple of new features, including sharding and auto-sharding. The growing popularity of Mongo among startups, its comprehensive feature set, and the flexibility of a no-sql data model is turning out to be a powerful combination.

The recent MongoNYC was packed and for those of you in europe, please note that MongoUK and MongoFR are both happening later this month.

A Really Cool Opportunity For A Rails Developer In NYC

I can't say what company this is for but I can assure you its one worth joining.

Here's what they are looking for:

NYC start-up looking for a ruby/rails developer who enjoys working up and down the application stack. You'll have a huge impact on the expansion of our platform and the growth of our small engineering team. Your time will be split between iterating on the product, developing new areas of functionality, and applying a maintainability and scaling-aware mindset to our core architecture.

Help us solve interesting problems, from adding location features, to looking for interesting patterns in our data, to assessing and implementing new technologies like MongoDB. We encourage contribution to open source projects and appreciate diverse backgrounds in and out of technology. Experience with payment platforms, faceted search, and building content management tools is nice but not a must.

Interested? Get in touch at [email protected] (pls link to your github profile, if you have one).