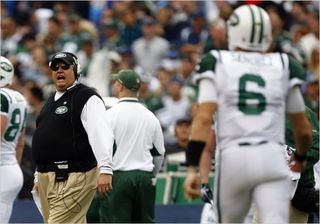 Yesterday I blogged about girls basketball and role models. Today I'm going to blog about football coaches and leaders. I guess I've got sports on my brain this weekend (for good reason).

The NY Times has a nice front page article this morning about Rex Ryan, the rookie coach of the NY Jets. Here are a few quotes:

In Ryan’s first season as coach, he changed the Jets’ second-class existence through the sheer force of his bold and brash personality. He spoke loudly and often about the talent that surrounded him, until the players believed every word he said.

Ryan turned one of the N.F.L.’s most clandestine operations in into an open book. The Jets collapsed at the end of 2008 in part because of the tense atmosphere. Ryan changed that, changed a culture, changed the way people felt about coming to work.

Companies are reflections of the people who lead them. Same with football teams. I've watched almost every Jet game this season and last season. The difference in the team is so visible. They play with a brash and bold style this year that was not on display in the Mangini era.

But it's the last line of the second quote that is the biggest deal, he "changed the way people felt about coming to work." That's what great CEOs do. They inspire people to come to work with a bounce in their step and a desire to do great work.

And that is largely about people skills. We all know people who have the special touch with people. They make people laugh, smile, and feel good. Those people make great CEOs, leaders, and football coaches.

But it is not enough to be a cheerleader. You also need to have a plan, you need to be close to the product, you need to know where to lead people. Here's another couple quotes from the Times article:

Instead of operating from a tower like a dictator, Ryan walks the hallways, massaging egos, cooking up defensive plans.

"Beneath it all, he’s super, super intelligent,” Pettine said. “Like the guy in the movie ‘A Beautiful Mind.’ The things that come out of his mouth are not being shot from the hip. There’s a plan behind all of it.”

So there you have it. The recipe for a great leader is:

3) Has the intellect to make the right decisions

We'll see how well Rex Ryan and the Jets do today against the Colts. They are big underdogs and rightly so. I'll be rooting hard for them and I'm sure the Jets will give it all today.

But win or lose, Rex Ryan has impressed me very much in his rookie season. I look forward to watching him work the sidelines of Jets games for many years to come.