I saw this in a story I was reading this morning about mobile reading habits:

A year ago, the iPad accounted for 81% of tablets in circulation. That has fallen to 52%, with Android-based tablets grabbing a 48% share of the market. Amazon’s Kindle Fire accounts for far and away the largest slice of those: half of the Android tablets in use are Kindle Fires, and they represent 21% of the overall tablet market.

If that's true, that is a big deal. Our family has moved from iPads to Nexus 7s in our home but I didn't think the rest of the world had moved to Android tablets too.

I am curious if others are surprised by this. I honestly had no idea that Android had made such a big move in tablets. I realize Kindle Fire is hardly Android. More like a third tablet OS. So it's really like iPad 52%, Android 27%, Kindle Fire 21%. But even so, this is a big deal and I am surprised.

I still think of a 7" as a vinyl record for EPs and singles.

But 7" is going to start to mean someting else as I believe it is an ideal form factor for tablets.

I moved from a Kindle to an iPad for reading a couple years ago. I wrote about that at the time and explained that I preferred the backlighting and the ability to uses maps and wikipedia and such to jump out of the book and drill down on something in the book that sparks my curiosity.

Then the Kindle Fire came along and I immediately grabbed one of them. I've been reading on a Kindle Fire since it came out. I love it for reading books. But it is not a true Android tablet. It is really a Kindle with some extra stuff like a browser and some apps.

Some friends at Google sent me a Nexus 7" last week. I set it up yesterday and I've been using it for about 24 hours. So these are preliminary thoughts on it.

I put a bunch of my favorite apps on the home screen: 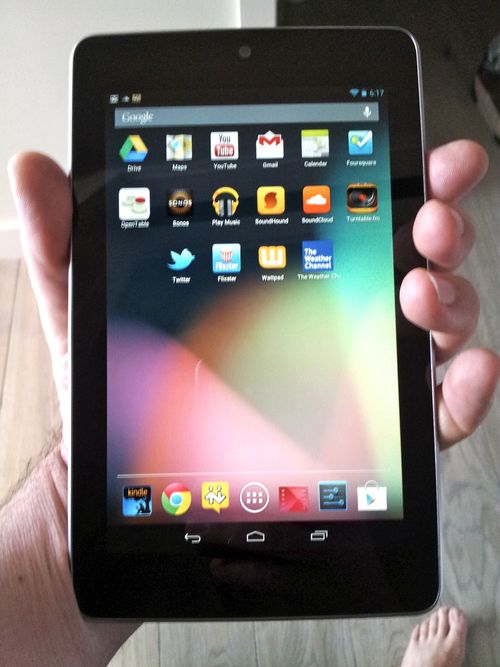 If you look at the bottom of the home screen you'll see a yellow icon next to the Chrome browser. That is Bria, a SIP client that I have been using on my android phone. With Bria, the Nexus 7" can be a phone and I used it yesterday to make a few calls. It works great but if I really wanted to use this device as a phone, I'd want a bluetooth headphone because a 7" tablet is not ideal for talking into.

The three apps that I use a lot that aren't on my Nexus 7" home screen are Instagram, Tumblr and Kik. Instagram and Tumblr are not available on the Nexus 7". I hope these companies fix that because I would use these two apps a lot on this device to follow folks on Instagram and Tumblr. Kik only works on one device at a time so if I put it on the Nexus 7", it would stop working on my phone. So it's not on my tablet.

But the main thing I use the Nexus 7" for is reading, primarily on the Kindle app. 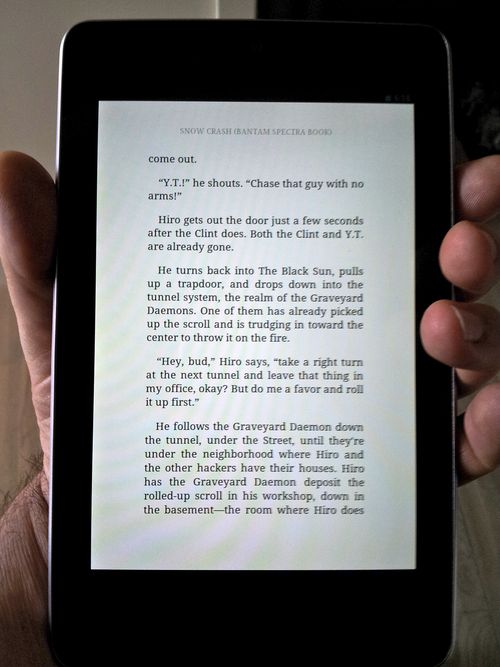 The bottom line is that I think the 7" tablet is a great form factor and I prefer it to the iPad for a bunch of reasons. It is more mobile. It is lighter and more comfortable being held in one hand. And I like the amount of a page that is rendered on the 7" screen. It allows me to read more quickly.

The good news for iPad/iOS fans is that Apple is apparently going to come out with a 7" iPad soon. So you don't have to go Android to get the 7" experience. But if you want to try Android or you want to try a 7" experience right now, you might give the Nexus 7" a try. It's available for pre-order for $199. I don't know when it will broadly available but I suspect soon.