The folks at Turntable aren't calling it 2.0, but it sure feels like a massive upgrade to me so that's what I call it when I talk about the new UI and big rooms concept that Turntable quietly launched yesterday without much fanfare.

Full disclosure, USV is an investor in Turntable and I am on the board.

Turntable.fm, for those that don't know, is a live social music experience. Anyone can start a room in the service and a room features up to five users who jump up on stage and take turns DJing, and then the rest of the folks in the room listen, rate the songs, and chat. It is the most social music experience I have ever experienced online. I spend most mornings between 5am and 7am eastern hanging out in Turntable. Like most social online services, I have friends there who I have never met in person. I get better music discovery at Turntable from people I have never met than I get from anywhere else.

It makes sense if you think about it. Folks who are so passionate about music that they get up on stage and DJ live in front of everyone else will also likely have spent countless hours finding music that nobody else knows about yet. That's how music has always worked and how it will always work.

Turntable's achilles heel has always been that the rooms didn't scale. In version 1.0, when a room got to 200 people, it closed up to new entrants. So if you showed up looking to get into your favorite room you could often be out of luck. That is not and never was a good user experience.

Worse is that when a musician, artist, or celebrity showed up in one of the rooms, only 200 of their fans could get in to hear what they were up to. So the whole viral nature of an artist with hundreds of thousands or even millions of fans tweeting out that they are in a room in Turntable was mostly wasted in version 1.0.

All of that has been fixed in Turntable 2.0. The rooms scale up as more users show up. The UI changes in real time. A room starts out feeling like a tiny club and could end up feeling like an arena concert. Here's an example of a "big room" in action: 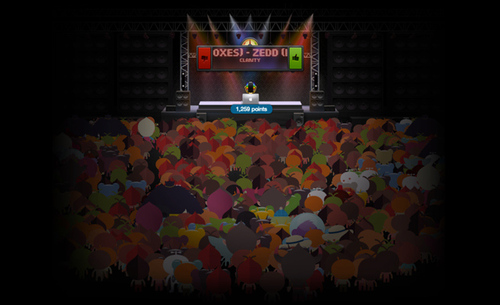 It's a real work of UI art and kudos go out to Billy and Byron for their work in building the new Turntable UI.

They've also made a bunch of smaller changes, cleaned some things up, moved some things around, speeded it up considerably, and made the service easier to join and get into quickly. I've been watching this new version emerge over the past few months and am so excited as a user to be able to experience it myself now.

If you want to see a big room in action, you can log into Turntable today at 3pm eastern to catch the electropop act Passion Pit playing some of their songs in Turntable. I expect that room will fill up nicely. I am going to try to get in and check it out myself in between running around SF between meetings. I hope to see you there.