Posts from Research In Motion

One of the things we try to avoid in our investments is gatekeepers. We would prefer that a company has easy access to end users and doesn't need to navigate through a gatekeeper or a series of gatekeepers to get into the market.

Mobile internet investing has been tricky for as long as I have been doing Internet investing. Initially it was the carriers and handet manufacturers who controlled access to the end user. If you wanted to be in the mobile internet business, you spent your time working with carriers and handset manufacturers to get distribution. We didn't like that business and didn't invest in it.

With the advent of the iOS app store model, we saw a change in the market and changed our stance. To date, we have at least a dozen investments where mobile apps represent an important part of the user base.

But in the past ten days, I have seen three different situations, not just in our portfolio but with companies I've met with or know well, where the company's app was either not approved or pulled from the market. This is not limited to the iOS app store. It has also happened in the Android marketplace. And of course, we have seen RIM's removal of a Blackberry app create great harm to a portfolio company.

These actions are always taken in attempt to enforce terms of service and to protect end users. I am not complaining about the actions or saying they are unfair. They are what they are. But the mobile Internet is not the open web and may never be.

Welcome to the new boss. Same as the old boss.

The Present and The Future (continued)

It's the theme of the weekend. What looks great today may suck tomorrow.

Case in point, Blackberry and their parent company RIM. I was at dinner a few weeks ago with old friends. Both of them carry Blackberrys and they love them. I predicted that they would be using a new device shortly and that RIM would be in deep financial trouble within a few years. They were surpriseed to hear such a negative point of view.

But as this excellent analysis of RIM's business suggests, the present and the future look very different for RIM. The charts in this post come from the post I just linked to. You should read it.

If you look at RIM's financials, everything looks rosy: 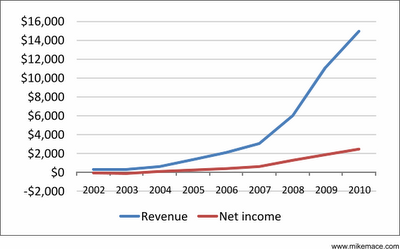 Not only are revenues and profits at an all time high, but so are subscribers:

But subscriber growth has peaked:

And may be headed into decline:

It is often the case that on the surface companies can appear to be in great shape. If you just focus on the financial results, you can miss the underlying symptoms of future problems. I've made that mistake many times, hopefully enough times that I will make it less in the future.

What you need to do is peer into the future and try to figure out what is going to happen next. In RIM's case, I sense that a "platform collapse", as the author of the blog post calls it, is a real possibility in the next year or two.

RIM's stock is trading at a PE of just under 12, almost identical to Microsoft's. It seems like the market is well aware that the growth era is over and is counting on a long period of flat growth but strong profits for years to come. A platform collapse is not baked into the market's multiple.

The big platforms out there, Apple, Android, RIM, Facebook, Twitter, etc are powerful but fragile. They need to keep innovating and providing users AND developers real value. As myspace has shown, when platforms stagnate they can easily fall apart and the decline can be fast and devastating.

I think the assumption that tech platforms can stop growing but remain great businesses is flawed in most cases. Maybe RIM can pull it off. Their strong enterprise franchise may make it possible to execute the long fade, but it is also possible that it won't. If you are an investor or manager in a large tech platform, dont' get caught up in the present. Think hard about the future and where the platform is going. That's where the value is.