Twitter is a great example of this. For years, every post, column, or article written about Twitter would have comment after comment making fun of a service where people "told the world what they had for lunch." Of course, people were doing that on Twitter and people still do that on Twitter. But what those mocking Twitter were missing is that in between the tweets about pizza and pita were posts about politics and poetry. There was substance in the midst of nonsense.

And all the while that those mocking Twitter were obsessing about the nonsense, the substance was increasing and the usage was growing. Comscore has Twitter's monthly users at ~170mm people worldwide, up >60% in the past year. That makes Twitter one of the top twenty websites in the world and it is growing faster than most of those twenty websites. That is what I call "breakout success."

I woke up thinking about this because before I went to bed last night I watched last night's episode of Rock Center with Brian Williams. They had a piece on our portfolio company Kickstarter. The piece itself was pretty good. But at the end, Brian Williams discussed it with the Kate Snow (who did the piece), and he said something like "so this is like the guy on the street asking for a handout?".

Kickstarter couldn't be farther from the "guy on the street asking for a handout" and yet that was Brian's takeaway after watching the piece (or maybe he didn't watch it). Either way he mocked Kickstarter and misunderstands it. And that is fine with me. Because its a signal that Kickstarter is on to something big.

I knew that already, but situations like this are reinforcing for me. They are the "tell". So when your company and services gets mocked and is misunderstood by most everyone, particularly the mainstream press and media, just smile and keep doing what you are doing. You are on to something big. 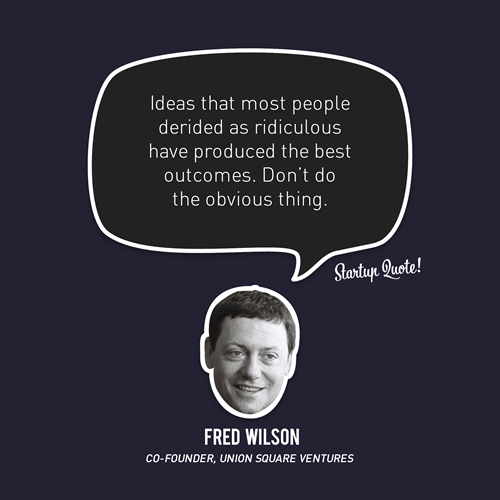