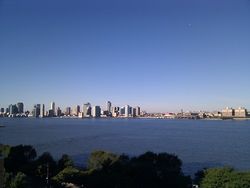 It's a clear blue sky this morning in lower manhattan.

Seems like most of the September 11ths we've had over the past nine years were just like today and just like the one in 2001 that will leave this date in infmany for centuries to come.

I turned 40 that year, a few weeks before the day the towers came down. I was dealing with the aftermath of the bursting of the Internet bubble, I had a portfolio full of red ink and mismanagement. That morning I was at a board meeting of a high flyer that had come crashing down. We had replaced management too late and we did not save that company.

That was a horrible day. But thinking back to that day and that time in my life reminds me of a great story that Dave Pinsen told in the comments my post last saturday. Here's the part that struck a chord in me:

Even in the midst of Apocalypse, things will get better.

That’s something people don’t quite seem to understand. In fact, it’s why teenagers tragically kill themselves over some girl or boy: They don’t realize that, no matter how bad things are now, they will get better later. To repeat:

Even in the midst of Apocalypse, things will get better.

I’m not repeating this insight as an empty comfort to my readers—I’m saying it as a trading strategy. When things are at their crazy worst, when everyone believes the Apocalypse is well nigh here, that’s when thing are about to turn for the better.

Things have gotten better. The families who lost loved ones that day have for the most part moved on with their lives. Kids who lost a parent that day have graduated from high school, gone on to college, and will go on to live fulfilling lives. They will, of course, never forget their loss and will suffer that pain for the rest of their lives. But for most who suffered losses that day, the pain has not been paralyzing. They have moved forward.

NYC has gotten better. Downtown NYC has not been as vibrant in many years. The hole in the ground is finally getting filled. New York City is a resilient place and the future is very bright for this city.

The terrorists who planned and executed that hateful act have been under attack ever since. Many have been killed or captured. The world is probably not any safer today than it was that day but we are now on notice that such a horrible thing can happen anywhere in the world and we are more vigilant about making sure it doesn't happen than we were before that day.

I did not conciously write two posts in the past week about "blood in the streets" but I did. This is the third and final post on that topic. There is no blood in the streets in my world right now but the experiences I had a decade ago have left a permanent mark on me. I know that bad things can and will happen. And I also know that what does not kill you makes you stronger.

That's all I've got this morning. I'm going to go sit outside and enjoy the beautiful day.