Roughly three months ago, I wrote a post noting that Founder Labs was coming to NYC. Last night the first Founder Labs program in NYC wrapped up wtih the final presentations in USV's event space. 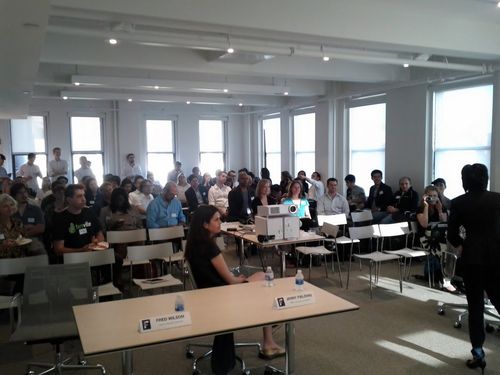 I have liked the idea of Founder Labs from the moment I heard about it. It sits between things like Pair Up and Startup Weekend and Y Combinator and TechStars. Founder Labs helps pair up three and four person teams, coaches them through ideation, all the way to a prototype. And they do this in a five week intensive class that meets on nights and weekends so you don't have to quit your job to do it.

The Gotham Gal and I were active mentors in the Founder Labs program, meeting with the teams once a week at space hosted by Google NYC, and also provided support for the NYC program along with a few other awesome people and companies.

Founder Labs creator Shaherose Charania is a force of nature. She handpicks the participants in the program and helps to form the teams. I told the assembled group last night that the teams that are formed at Founder Labs are terrific. They are diverse, well balanced, and highly compatible. Each one has engineers, designers, and product talent on them. I have never seen a program create teams as well as Founder Labs does it.

If you want to do a startup but are having a hard time finding a team to do one with, you should really consider Founder Labs. The next program is in SF from Aug 11 to Sept 22. But I am certain Shaherose and her team will be back in NYC before the end of the year.

The first NYC program was so strong and there were are least two teams, maybe three that will come out of it with real traction. The winner last night was Smarketplaces, a project to put ebay/etsy style marketplaces on blogs like Disqus has done with comments. It has great promise. Authy was also quite strong with a user side solution for simple and easy two factor authentication. There were two interesting projects around alternative medicine services and helping people with food allergies navigate the world of food. We also saw new ideas in social music and daily deals.

Regardless of whether all of these teams turn into startups and businesses (I think several will), all the participants will come away with an appreciation for how to get a startup off the ground, what makes a great team, and how to quickly find out if your idea is a good one. And because of that, Founder Labs is a winning formula.

One of the best things to happen to startupland in the past five years is the emergence of the startup accelerator. Programs like Y Combinator, Techstars, and many others have made the difficult phase of going from a founding team and an idea to a real business and funding just a little bit easier. But the period before you get into a startup accelerator is also very hard and there are less support systems.

Two of my favorite pre-accelerator programs are Startup Weekend and Founder Labs. In these programs you can show up with an idea, without a team, a plan, and much of anything else. They help you put a team together, develop the idea, and get going. Startup Weekend does it in a weekend. Their approach is to "share ideas, form teams, build products, and launch startups in 54 hours." Founder Labs does it over 5.5 weeks, nights and weekends. Their approach is "keep your job for now, build a team and launch a prototype." If you have an idea but not much else and need help, these programs are for you.

Startup Weekends happen all the time all over the world. They are doing one in NYC on April 15-17th.

Founder Labs are longer and more of a committment for everyone involed. They are focused on building mobile based businesses and diverse founding teams (men and women). Founder Labs was started by Women 2.0. To date the only Founders Labs have taken place in San Francsico.

I'm excited to say that Founder Labs is coming to NYC this spring. It will happen from May 21st to June 29th. Applications are due by April 20th. You can apply here.

The Gotham Gal and I have been helping the Founder Labs team come to NYC. We've helped to get the sponsors together, get the space nailed down, and get a great group of mentors. But most of the work has been done by Shaherose Charania and Baat Enosh, who are the creators and operators of Founder Labs.

There is a lot coming together in NYC right now. We've got startup fever in addition to spring fever. And Founder Labs is a great addition to the landscape. If you are an entrepreneur with an idea for a mobile application/business and need some help developing it, you should really consider Founder Labs.