Google Analytics has a relatively new feature that allows you to look at your "social sources" of traffic. According to Google, about 27% of the vists to AVC in the past month came from social sources. For those who are curious about the rest of the traffic, 30% is direct, 15% is search (much of which is really direct traffic), and of the rest, about half is from social sources.

Here are the top social networks that drive traffic to AVC:

Twitter and Hacker News have been the mainstays of the social traffic to AVC for a long time. Last year, StumbleUpon was driving a ton of traffic to AVC, but that waned early this year and it is much less of a factor today.

Facebook, Techmeme, and Disqus are the other big social drivers of traffic.

And the traffic that Disqus drives is markedly different than all of the other social sources. These folks hang around longer, read more pages, and engage more.

If you have a blog or some other form of online media and have a Google Analytics tag on your pages, I suggest you take a look at your social sources. I think you'll find it interesting.

In the past week, the daily visitors at AVC have gone from an average of 10k per day to over 20k per day.

While this influx of new visitors is welcome (welcome everyone!), it is also unnerving. Where is it coming from?

Well the answer to that is pretty obvious – StumbleUpon. Here are the top traffic sources to AVC for the past week. 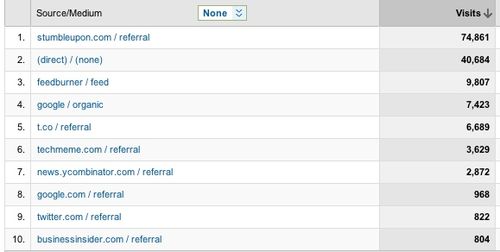 But I've never seen a firehose of traffic and visitors like I've seen this past week from StumbleUpon. I'm not entirely clear what is happening here. But I hope it continues. More readers means more conversations and opinions and more friends. Welcome Stumblers.