So I’ve ruled out firewall/content protection and I now think it’s an IE issue with some of the script on my page that is causing this page load issue. The reason is I can’t replicate the problem and the one browser I don’t use is IE.

I’d love it if you call can let me know if you can replicate the page load issue in IE and if you experience it with any other browsers.

I’ve heard from three people today, including both my brothers, that they can’t get AVC to load today.

I thought maybe it was a typepad issue, but I had no problem loading the blog and neither did a bunch of other people.

Then I thought maybe it’s a browser issue, but it loaded fine in Firefox and Safari and people tell me it loads fine in IE.

Then my brother suggested that maybe it was a content protection/firewall issue. It made me wonder if AVC got blacklisted or something.

I realize that if you are reading this, you probably don’t have the issue, but if anyone has experienced this problem today, I’d love to know what you are seeing and if you are trying to access from a protected network like a corporate network or a hotel network.

Arguing About The Long Tail

Lee Gomes took a swipe at Chris Anderson’s The Long Tail in the WSJ (of course) yesterday. He said:

Wired Magazine editor Chris Anderson’s hot, new best seller, "The Long Tail," is causing a sensation with its eye-opening claims about the way the Web is rewriting the rules of commerce. But I’ve looked at some of the same data, and some more of my own, and I don’t think things are changing as much as he does.

Chris quickly reacted with this post where he said:

I’m actually quite an admirer of Gomes’ work and he certainly did do a lot of research for this piece. But he started off with the wrong end of the stick (looking at the market in percentage terms, which doesn’t work because the definition of "head" keeps changing) and sadly wouldn’t let it go.

Unfortunately their debate is being held over math, specifically how to measure whether consumption is moving “down the tail”. And they are using data from places like Amazon and Netflix to bolster their arguments.

I have always felt The Long Tail discussion should be focused on goods where there is no manufacturing cost, ie digital goods. Because that’s where you are getting the explosion of available items to consume.

And in that world, it’s very clear to me that consumers are moving down down the tail, simply because they can. Take Rhapsody. Les Gomes writes:

March data for the 1.1 million songs of Rhapsody, another streamer, shows a 22% no-play rate; another 19% got just one or two plays.

But those 200 thousand songs that got played on Rhapsody wouldn’t have been bought at all on iTunes. Because they are free to play on Rhapsody. That’s where The Long Tail comes into play.

I wouldn’t even focus on Amazon and Netflix and iTunes. They are traditional businesses for the most part.  Sure Amazon, Netfix, and iTunes stock more than a traditional retail store, but they are still limited in terms of how much they stock and how much content is available for consumption.

I would focus the long tail discussion on blogs, YouTube, Flickr, Rhapsody, Google, and places where consumers are free to consume whatever they want. That’s where you’ll see The Long Tail flourish.

Les Gomes does mention some blog data in his WSJ piece.  He said:

Bloglines, the widely used blog-reading tool, lists 1.2 million blogs; real ones, not computer-generated "spam blogs." The top 10% of feeds grab 88% of all subscriptions. And 35% have no current subscribers at all.

Subscriptions are the wrong thing to measure in the blog world. I have 11,500 subscribers to this blog and about 50,000 unique visitors a month. My subscribers are my most loyal readers, but I have a much larger audience.

And because of ad networks like Adsense, YPN, FeedBurner, and others, every one of those page views can be monetized and the dollars will get distributed on a curve that has a long tail.

Compare that to the traditional media world. There is no tail, long or short, in that world.

So Lee Gomes can have his traditional media world. I prefer the one I live in. The one with The Long Tail.

The Gotham Gal and I went to see Golden Smog last night at The Bowery Ballroom. We ran into a bunch of friends and family including my brother Rod and his wife Karen. We had a good view of the show from the balcony where I captured this video of their cover of Bowie’s Starman. I also uploaded a video of their new song Frying Pan Eyes to my YouTube account in case you are interested in that one too. 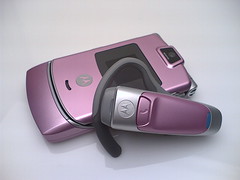 I even bought the treo branded headphone specifically to pair with my treo when I was using that phone.

I’ve tried everything to make these things work reliably.

And I can’t get them to pair reliably and stay paired.

I feel like an idiot with a bluetooth headphone in one ear and my phone held up to the other ear and it happens to me all the time.

What I want to know is if this is how bluetooth is supposed to work or if there’s some secret I don’t know to make it work for me.

I am all ears and waiting for your thoughts in the comments.

I wrote that post on my blackberry sitting on the runway waiting to take off. It was a bit rushed. And the comments I’ve gotten so far, while helpful, indicate that I missed my point.

I have tried various bluetooth headphones with the Treo, the Blackberry (which I currently use), the Sidekick, and a windows mobile phone. I’ve never had a good experience.

The comments I’ve gotten so far indicate it is the phone. I am currently using a blackberry. Does anyone have a good suggestion for a bluetooth headphone for my Blackberry 8700?

One of the best lines I have heard in a long time was uttered by an entrepreneur we know. He was talking about one of his co-founders who one day decided he didn’t want to work anymore. He said about his co-founder, "he called in rich". I laughed so hard I almost cried.

I’ve witnessed this situation more than a couple times. People work really hard, build something valuable, realize the value in some sort of transaction, get paid a lot of money, and then one day they wake up and don’t feel like working anymore. They call in rich.

It’s a funny line but it’s not always a funny situation. Because it can tear apart partnerships that were working really well. People are wired differently. Some people are not be affected by wealth. They will work as if they don’t have a dime until the day they die no matter how much wealth they accumulate. Though they appreciate wealth, it’s not what motivates them to work. Others are doing it only for the money. And when the ones who are only in it for the money call in rich, they are walking away from others who don’t want to stop. And it can cause problems. I’ve seen relationships ruined over such situations.

But it’s really all about how it’s handled. If partners are honest with each other about what motivates them, what they want to do with their lives, etc, then you can manage the hole in the partnership that gets created when one person calls in rich. Giving people plenty of time to plan for the departure is really the key. Telling your partners that you are leaving in a year or 18 months is fine. That’s enough time to fill the gap.

But truly calling in rich, leaving little or no notice, is a disaster for those you are leaving behind. And its surprising how often it happens.

The copyright stuff is an issue, but I think the big issue is revenue.

I suspect pre-roll and post-roll ads are a non-starter as far as the audience is concerned. Therefore you need video ads that users WANT to watch. Ads that users will voluntarily initiate.

Now on the YouTube site proper that’s do-able (although requires more clever ads than repurposed TV ads). You can do collaborative filtering and associate advertising vingettes with user contributed content. Eventually it will be difficult to tell the ads from the content (if YT and advertisers both execute).

The real challenge is how do they make money letting third parties embed content in their own sites with YT paying the bandwidth bill. Is 3rd party embedded content just a marketing expense?

I like the idea of advertisers uploading their ads to YouTube and making them interesting enough that people will voluntarily watch them. I found a number of the “I’m A Mac” ads on YouTube but I doubt that Apple uploaded them and there are quite a few spoofs. Great stuff.

In this model, do advertisers pay YouTube a cost per play? And will that be enough to fund the rest of the service?

John Battelle has a good short post on why he think nobody is going to pay $1bn for YouTube anytime soon. His issue is copywright liability.

Like all great posts, the real action is in the comments.

One of Mark Pincus’ favorite topics is political corruption. He really cracked me up with this post yesterday. Check this part out:

I can’t wait for the day when we the people get a chance to bid
openly to buy off politicians and contracts. If this system were just
put online at least it would be open and competitive. Then maybe the
better projects might win. At least these sleazy, dumb old white men
wouldn’t be the ones getting rich and the margins might go down.

Besides, with this system of openly bid payoffs the money would be greater and we might attract smarter people.