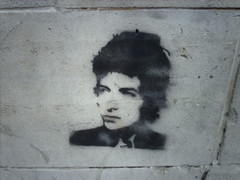 The Gotham Gal and I took Josh and his friend (and fellow Four Fellas member) and his friend’s Dad up to the Morgan Library yesterday afternoon to see their exhibit on the early years of Bob Dylan’s career.

If you are a Bob Dylan fan and live in or are visiting NYC this fall, you must go see it. They have listening booths for each of his early records (until his motorcycle accident). It’s not about listening to the records, although it’s great that they’ve incorporated the music into the exhibit. It’s about putting the music in perspective. And they do a great job of that with photos, the typewritten lyrics with Bob’s handwritten edits, and the guitars and harmonicas.

My two favorite moments were seeing the photo of the boxer Davey Moore who was killed in the ring and immortalized by this amazing song.

And there was a video of Bob Dylan shot on his 1966 european tour. He sees a sign on a wall and starts making up and talking instant poetry using the words on the sign. There’s a part near the end where he starts dancing to his words. I’ve never seen that footage before. Here’s a cutup and black and white version of that footage I found on YouTube. The version in the exhibit is much better.