The Four City Day and iPhone 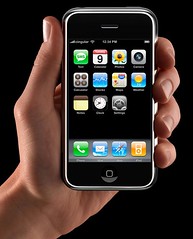 Yesterday was killer. I started it in Phoenix at 6am after getting four hours sleep. I was in Phoenix to see Howard and watch the OSU/Florida game with my OSU friends. We had to go out afterwards to wash down that loss. OSU was just terrible. So I got back to my hotel late and had an early flight to catch.

Then to Vegas for CES and a bunch of meetings. I landed in Vegas to the iPhone news. More on that later in this post.

CES is nuts. I was overstimulated in five minutes. The highlight for me was seeing all the action in the HD Radio booth. There had to be forty to fifty different HD radios in all forms and price points; car radios, hybrids, table tops, tuners, a USB radio for your computer, etc, etc. HD is happening. It’s real. I also enjoyed doing a meeting with Peter from Bug Labs behind the Girls Gone Wild truck. That was memorable. But it sure did feel like the big CE news of the day was happening at Macworld.

Then it was off to Denver where I camped out in the airport for a couple hours and talked to Jessica who pulled up Jobs’ Macworld show on her computer. She started telling me facts about the iPhone, and then she stopped doing play by play and I just heard "wow, wow, wow". She told me she could feel her Apple stock (AAPL) going up just watching the speech. I told her to check her stock ticker. She told me Apple was up $7 on the day. That led to some more "wow, wow, wow". Yesterday was clearly a good day to be an Apple fan and/or stockholder like Howard.

Then I hopped on a quick flight to Aspen where I am attending a Jeffries and Company event. There are a bunch of media execs and private equity investors here. At dinner and afterwards we discussed CES and the iPhone. It’s on everyone’s minds.

My take on the iPhone? It’s an awesome product. But I don’t think its going to make a dent in Research In Motion’s (RIMM) business. I don’t see myself going away from a device with a keyboard. I think iPhone is going to be a big hit in the consumer smartphone market (with the caveat that the price point is an issue). But for mobile mail, there isn’t a better device than the blackberry and I’ve tried them all.

I also think the exclusive deal with Cingular is nuts. Why force people who want an iPhone to switch carriers? Apple is an obnoxious company. They make wonderful products that blow me away. But I really dislike their approach to business. I won’t use the iPhone unless you can get it unlocked and run it on any GSM network.