Last night Jessica showed me an essay she wrote after reading DBC Pierre's Vernon God Little. In the opening paragraph she wrote:

DBC Pierre explores the effect of media on citizens, and the greater theme of truth, or rather lack of truth, in everyday life.

It was a proud moment for me, because if there is one thing I hope to pass onto my children, it's the notion that there is no singular truth.

I was at a dinner last week where much of the NYC digerati (young and old) were assembled in a lovely apartment on the upper east side. After dinner but before dessert, the hosts initiated a discussion of the obsession of the moment: whither media. At one point, the argument came out that we need journalism to surface the truth. At which point, I sort of lost my composure and argued loudly that there is no truth.

There used to be a mantra at the upper right of this blog. I can't remember what it said exactly, but the gist of it was that there is no absolute truth, just your truth and my truth. I post my truth here everyday and I hope you'll drop by and share your truth with me.

This is the promise of social media. It's revolutionary. When you give every citizen in the world a printing press, you ought to expect revolution. And it is upon us.

I loved this paragraph in NY Mag's piece on Twitter which is in the current issue:

Now think about that for a second. In the midst of chaos—a plane just
crashed right in front of him!—Krums’s first instinct was to take a
picture and load it to the web. There was nothing capitalistic or
altruistic about it. Something amazing happened, and without thinking,
he sent it out to the world. And let’s say he hadn’t. Let’s say he took
this incredible photo—a photo any journalist would send to the Pulitzer
board—and decided to sell it, said he was hanging onto it for the
highest bidder. He would have been vilified by bloggers and Twitterers
alike. His is a culture of sharing information. This is the culture
Twitter is counting on. Whatever your thoughts on its ability to exist
outside the collapsing economy or its inability (so far) to put a price
tag on its services, that’s a real thing. That’s the instinct Stone was
talking about. If the nation has tens of millions of people like Krums,
that’s a phenomenon. That’s what Twitter is waiting for.

"His is a culture of sharing information" No, that is not his culture. That is our culture. That's where we are because every single one of us has a printing press in our hands at all times. I do understand that not everyone on this planet has a cell phone with a camera and an internet connection, but you get my point.

We've moved past the time when big institutions controlled what we read, what we thought, and what we believed. And we are arriving at a new place where each and everyone of us will report on our world and share it with others. Sharing is the new truth.

Sunday night the Grammys told us that Robert Plant and Allison Krauss made the record of the year. That's fine. That's their opinion. Mine is different. I believe that Okkervil River made the record of the year last year. But you know that because I published that opinion on this very blog in December of last year. Compare the Grammys to the Hype Machine's Music Zeitgest and you'll see what the old world looks like and what the new world looks like.

How does fredwilson.fm get programmed? Sharing, of course. Each day I share one mp3 on my tumblog. fredwilson.fm just pulls all those posts together and plays them in a stream in reverse chronological order. Today, I'm sharing a track from a new band of teenagers from NYC called Care Bears On Fire. This brings me to my next point. I've got a vested interest in Care Bears' success (which I disclose in that post I linked to).

My partner Brad once asked his nephew why he preferred sports blogs to the sports sections in the newspaper. His nephew said "everyone has a point of view but with blogs, they are upfront about it". Indeed. I'm a Jets, Mets, and Knicks fan. That's the lens through which I view the sports world, sadly.

This culture of sharing is not limited to the written word. Log into Boxee and you'll see a screen that looks like this. 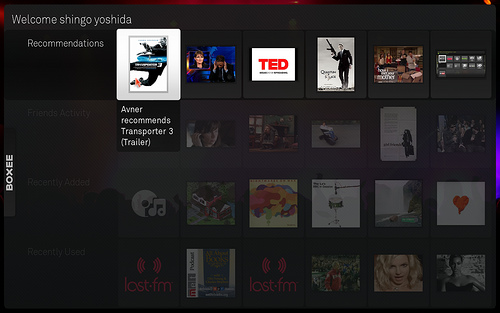 The very first thing you see when you log into Boxee are the recommendations from your friends on Boxee. Facebook's user interface is coming to your TV sometime soon. It's not going to be about what NBC, CBS, ABC, Fox, or anyone else wants you to watch. It's going to be about what your friends are watching. It always has been about that but we just haven't had the TV interfaces that recognize that.

There I go again, talking about my vested interests (our firm has an investment in Boxee). That's my truth.

I've got to end this post because I need to turn it into a presentation I can deliver at SocComm in about three hours. So I'll end this post by linking out to a couple of other truths out there on the issues I've covered here.