Use The Public Channel For Better Customer Service

One of Mike Bloomberg's greatest achievements is the creation of the 311 service here in New York City. These 311 services operate in many large cities in the US and Canada. The first one was in Baltimore in the mid 90s.

Apparently Bloomberg is a huge user of 311 himself and he calls all the time as he is driving around the city, reporting potholes and such.

We had a pothole in our neighborhood that I passed every day on my way to the subway. It was a big one and I'd watch car after car pound the hell out of their undercarriage as they made their way from Hudson onto Bethune street.  One day I stopped and snapped this photo with my Blackberry and posted it to Flickr (and then automatically to Twitter): 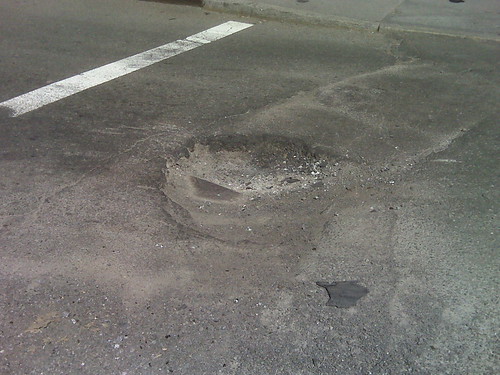 It would be great if you could twitter these in like: @potholenyc corner of bethune and hudson

Of course I could have called 311, like our Mayor does, and reported the pothole. But doing it this way does a bunch of things;

1) It saves the cost of staffing large call centers because computers can handle most of the processing of messages like this. There will still need to be humans at some part of this process, but the front end can certainly be automated.

2) You get an image of the pothole which should help the crews who fix them evaluate the worst ones and prioritize.

3) The photo and the twitter message is out there for anyone to see. Ideally this message would get routed, via something like our portfolio company outside.in, to the various local media in the neighborhood. If the messages have enough metadata in them, you could even create pages of local media based on the most common neighborhood issues (crime, infrastructure, schools, parks, etc)

4) The public discussion about the photo and related posts could be aggregated to create even more metadata and further identify the highest priority issues.

We see this "public channel" in action already with services like Comcast Cares on Twitter. Anyone can pick up the phone and call Comcast and tell them that their cable service isn't working. But the only people who know about that are the person making the call and call center rep taking it. When someone posts on Twitter that their cable service isn't working and directs the message to Comcast Cares, many people see that. Some of them may be other Comcast customers who might find out that their cable isn't working either. And as Comcast Cares elevates the issue, gets it fixed, and reports back, everyone gets to see that too. It's a huge win for Comcast. Anything that can make a cable company look better is a great thing and the use of the public channel is exactly that.

The public channel is just developing. It's in its infancy. Services like Twitter and Facebook are building key elements of it. But we need a lot more infrastructure to make this happen. I do not believe that the way this will happen is the creation of "enterprise services" that will be sold to local governments. I think we'll see things like GetSatisfaction and Uservoice develop that are consumer facing first and foremost that governments will be forced to adopt.

My friend John Geraci, co-founder of Outside.in, is developing a non-profit called DIYcity that is attempting to spearhead a movement along this idea. If you are interested in working on projects in this area, you should join DIYcity and start collaborating with others who are working in this space.

The public channel is the right channel for business and government. Most "customer support" issues are not confined to one person (just look at the comments on my American Express post for proof of that). So we should be using a public channel to talk to companies and institutions. They'll benefit and so will we.