If you search my name on twitter, you'll see a gazillion tweets that say something like this:

But, of course, that's not what I said. It's what Erick Schonfeld says I said at the 140conference yesterday in a post on TechCrunch. Now I know that we aren't supposed to believe what is written on TechCrunch and I certainly don't but I fear that many people still do.

So let me be perfectly clear about this. I said social media, led by Facebook and Twitter, will surpass Google in driving traffic to many websites sometime in the next year. The tweets in this stream validate that. Erick was in the audience but so were most of those twitterers.

Or we could just look at Jonny Goldstein's wonderful notes he took during my talk. 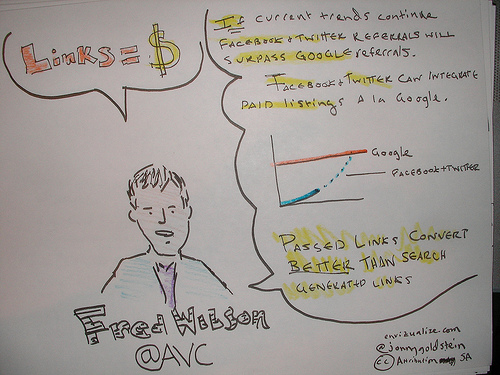 Ok, now that I've gotten that off my chest, I'll return to the regularly scheduled programming.