Is Momblogging The New Radio?

Momblogging is one of the fastest growing categories in social media. Here is some data I got from a friend who just completed a study on momblogging:

If you want to see some momblogs, here are some popular ones:

But how does all of this have anything to do with radio? Well, radio used to be the way a new musician was introduced to the world. And in many cases, it still is. But the innovators in the music business have adopted online media as the new way to break artists and we have quite a few success stories to point to including The Jonas Brothers and the Arctic Monkeys.

The person who initially broke The Jonas Brothers on MySpace using viral videos is my friend Steve Greenberg who runs the innovative record label S-Curve Records. In the spirit of full disclosure, the Gotham Gal and I are small personal investors in S-Curve. 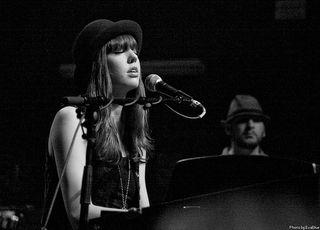 And now Steve has set his sights on the mom bloggers to introduce the world to Diane Birch, a wonderful singer songwriter who I think of as Carol King meets Norah Jones and Joss Stone. In fact, Diane’s first record, Bible Belt, which was released today, features the same production team as Joss’ initial record.

Here’s a track from Bible Belt called Fire Escape that is available for free at RCRDLBL:

This spring Steve was at the tech part of SXSW and met a bunch of mombloggers. He realized that Diane’s music was perfect for this community and so he called Diane and told her to get on a plane and fly down to Austin. They did a lunch for the mombloggers and Diane played her songs for them. It was love at first sight and sound.

And so as part of the launch of Bible Belt, Diane and S-Curve have teamed up with the mombloggers to get the word out about Diane and Bible Belt and also raise money for charity. They’ve created a series of  widgets that mombloggers can run on their blogs introducing their readers to Diane’s music and linking to Amazon and iTunes so people can purchase the record. And each momblogger will select one of several charities to get $1 per record sold. That’s most of S-Curve’s profit on the record which is priced at $6.99 for digital download. Here is the widget in case you want to run it on your blog.

I love so many things about this story. I love that Steve and S-Curve continue to look for novel ways to leverage social media to launch new artists. I love that they’ve connected so deeply with the momblogging community and are leveraging them to get the word out. I love that they’ve incorporated good and needy causes into the campaign. And I love that Diane’s music is going to get heard far and wide as a result.