Is Twitter A Substitute For Set Top Box Data?

For the past decade, the cable and television industry has been working to use set top box data in the way that click stream data is currently used on the web. To some, it is seen as the holy grail and/or the savior of the television business. The thinking is that if TV viewers can be understood, segmented, and targeted in the way that Internet users are, the TV experience and the TV advertising business can be transformed in ways that are beneficial to everyone.

The problem with set top box data is that it is controlled by the cable companies and they have not been particularly open with it. There are a few companies that have access to it, but suffice it to say that building a business based on getting access to set top data is not for the faint of heart.

So I was quite interested when I came across this post from one of our portfolio companies, Simulmedia, which is working in this TV targeting space. Simulmedia was founded by Dave Morgan, founder of Real Media and TACODA and a veteran of the online ad targeting business, to deliver similar products and services to the TV market. So he knows a bit about all of this stuff.

The post describes a little experiment Simulmedia did to analyze TV channel surfers using only Twitter posts as their data source. Simulmedia explains why they turned to Twitter data for this work:

To investigate surfing behavior further we tapped into data from Twitter,
where dozens of people announce to the world that they are channel
surfing every day.  Unlike traditional ratings or second-by-second
set-top-box information, Twitter has rich qualitative information that
reveals motivations behind viewers’ surfing.

Here's the results of their study: 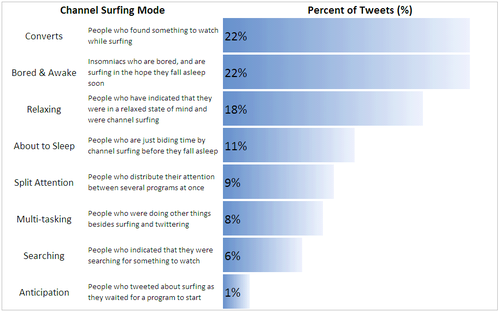 While the data in and of itself is interesting, I am more intrigued by the idea that Twitter can be used as a panel that once it is large enough (and maybe it is already) that can produce much of the same data that is currently locked in set top boxes and controlled by the cable companies.

The Internet is disruptive and reminds me of that fact every day.