Hacker News and the NoSQL Movement

I love Hacker News (aka news.ycombinator.com). I read it at least once a day and it sends this blog more traffic than anything other than Google and Twitter. This is the refer log for AVC for the past month. 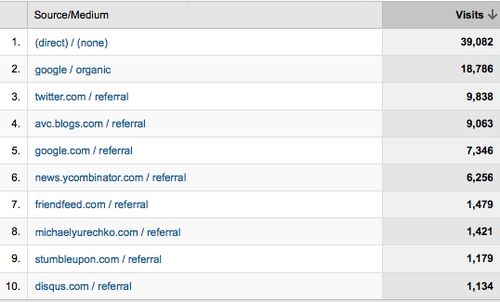 But like every great web service out there, it's the community at Hacker News that makes it so great.

This morning I read a Computer World article about the "NoSQL" movement. It was interesting to me because we have an investment in this market sector, an open source cloud based document store called MongoDB (which is mentioned in the computer world story).

There are three comments at Computerworld.com and there's 43 comments on the story at Hacker News. If you are interested in database issues, you'll find the discussion at Hacker News interesting and informative.

The SQL vs NoSQL debate is important, serious, and deeply technical. I am not going to even attempt to weigh in on it (other than to say we've got an investment in a NoSQL data store). But plenty of people are weighing in on it at Hacker News right now.

Of course there are other tech communities out there where discussions like this one have been going on for years. I am not saying they aren't vibrant and important. But Hacker News brings that together with a "techmeme style" blog aggregator and focuses very much on the startup entrepreneur (which is why it drives so much traffic to this blog).

Hacker News is a great service. If you are involved in tech startups and you don't read it regularly, you should.