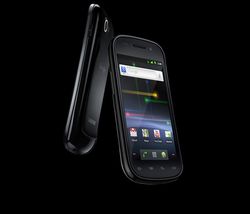 Last week I got a Nexus S to replace the Nexus One that I have been using for the past year. I love my Nexus One and was hesitant to replace it but the Nexus S looks like the exact same phone, just better, so I went for it.

As I was installing the basic apps (Twitter, Foursquare, Facebook, Kik, Tumblr, GetGlue, Yelp, Flickster, etc) on the phone last week, I tweeted that I love the new Twitter Android client on the Nexus S. I got a bunch of replies asking for a review of the Nexus S. So here it goes:

The physical in-hand experience is not much different but slightly better than the Nexus One. The phone is plastic instead of metal (which I like surprisingly), the screen is crisp and bright, the phone is very light, and feels great in the hand. The case is very slightly curved and this makes a small but noticeable improvement in the in-hand experience.

The camera is terrific. The Android 2.3 build comes with new and improved camera software. I am still figuring out all the features but it can do a lot more. The Nexus S has a back and front camera. It’s fun to take pictures that include the photographer in them and the front camera makes that so much easier. I am on my way to a family vacation and I didn’t bring another camera so all my pictures will be taken with the Nexus S camera. I’m not the least bit concerned about that.

It is still a bit too early for me to talk about battery life. I always carry a spare battery for my Nexus One and once or twice a week I had to do a swap intraday. I don’t have a spare for the Nexus S with me on this trip so that will be a big test of its battery life. But so far in the few days I’ve been using it, I’ve not run out of battery so I am cautiously optimistic.

The Nexus S is fast, significantly faster than the Nexus One. I feel the speed most in the browser, but I also feel it loading and running apps and generally moving around the phone. I am really enjoying using this phone and I think it has a lot to do with the speed.

I don’t notice any difference in voice utility or quality between the Nexus One and the Nexus S. I don’t use voice that much anyway, but when I do, it works fine. I am running the Nexus S on T-Mobile, which is the wireless carrier I’ve used for almost fifteen years, and the T-Mobile voice service is not Verizon quality. But I have lived with it and the Nexus S does just fine voice calling for me on T-Mobile.

The Android software keeps getting better and better. It is not as simple and easy to use as iOS. But once I figured out the quirks in the UI, I’ve come to like it very much. The Android app ecosystem has developed very nicely in the past year and most apps I want to use are now available on Android. Purchasing apps on the Android is not as simple as iOS, but I’ve got my credentials stored with Google and once you do that, it’s not a terrible experience.

All in all, the Nexus S is as close to an iPhone experience on Android as you can get. And the phone can be used on any GSM network you want. I just popped in my T-Mobile SIM card and I was off to the races. I also like that all I needed to do to get mail and calendar and contacts working was login with my gmail credentials. It all happens over the air. There is no need to sync an Android phone with a computer. It’s mobile to cloud and bypasses the PC altogether. That feels like how phones should work these days.

If you can deal with a touchscreen phone and are looking for an alternative to iPhone, then I think the Nexus S is an ideal phone for you. It sure is for me.