One of the most pernicious problems in a space full of them (K12 CS Ed) is the lack of young women interested in and taking advantage of classes on software engineering. Thankfully there are some people doing things to attack and address this problem. Top on my list in this area are Reshma Saujani and Kristen Titus and their organization Girls Who Code.

Yesterday and my friend and colleague Evan Korth (who is on the Girls Who Code board) and I took a couple hours to visit with two of the summer school classes in NYC. These summer school classes take place in host companies. We visited classes at IAC and Goldman Sachs yesterday. There are eight host companies in total this year - Twitter, Intel, eBay, Goldman Sachs, GE, AT&T, Cornell Tech, and IAC. Kudos to all of them. Enlightened self interest in action.

We started off at IAC. We talked with the young women for about 45 minutes. 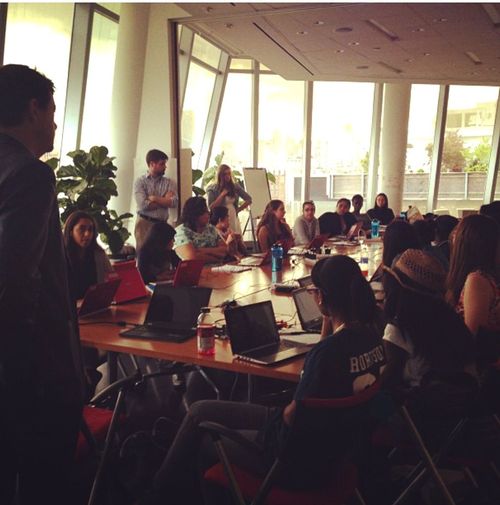 Then we went down to Goldman and did the exact same thing.

I've been following Reshma and Kristen's efforts since they started Girls Who Code eighteen months ago, but this was the first time I've been able to attend clases and meet the young women. It was a fantastic experience. Here's what I learned:

1) Learning to code is not nearly as hard as they thought it was going to be.

2) Coding is creative and fun, not boring and hard which is what they thought it was going to be before they took the class.

3) Nobody encourages young women to go into software engineering. There are societal stereotypes that are working against them. Family members, teachers, guidance counselors, and many others tell them "that's not a good career for you."

4) Project based learning where you make things is very impactful and way more rewarding than teaching the test and taking the test which is what they encounter in their schools.

5) Very few of these young women have encountered a coding class in their high schools. Almost all of the women we met with are in the NYC public school system. If they were offered such classes, all of them said they would take them. Most wanted to take the AP CS class and go to college to study computer science.

I was blown away by the intelligence, confidence, and character of these young women. They are going to do amazing things in their lives. Many speak english as a second language. Most are underrepresented minorities in our top schools. But unlike some of the kids I encounter in my personal life, they can stand up, look you in the eye, and speak eloquently about why they are doing this and what it means to them. I love seeing that kind of thing.

There's a lot going on in K12 CS Ed right now and I am seeing many things developing, some of which I have written about here, some of which I will write about when the time is right. There is a important change happening and I am confident that across the US we will see a lot of progress in K12 CS in the next decade. It's an economic imperative and also a moral imperative. And seeing Girls Who Code in action gives me hope that we are going to get women to join this movement, maybe even lead it. There is no reason they should not be doing that.