The Bronx Academy Of Software Engineering (BASE)

Last Thursday morning, I took the Lexington line (4 train) up to Fordham Road in the Bronx, then transferred to the Bx12 bus for a few stops and got off at the corner of Fordham Road and Crotona Ave. I walked a half a block south on Crotona Road and arrived at Grace Dodge Vocational High School, the home of the Bronx Academy Of Software Engineering. [foursquare, google maps] 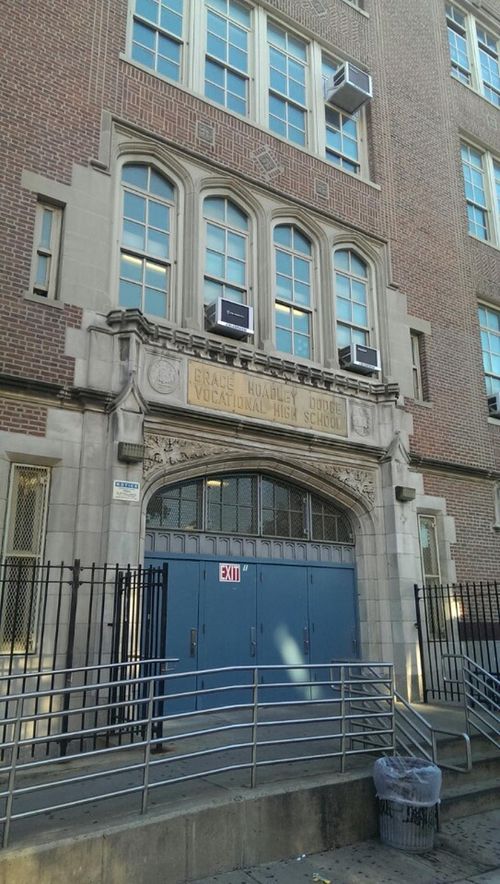 I was part a small group of tech community folks who spoke with the 9th graders in the school auditorium. We talked a bit about why we got into building software when we were young and how it has helped us in our careers and lives. We took questions from the students and then broke up into smaller groups for more discussion.

The students who go to BASE are almost entirely from the Bronx. They are bright and curious. One wanted to start a videogames company. Another wanted to study computer security. Another wanted my job. I told him that it will be available by the time he's ready for it. The one thing that these students aren't is white, wealthy, and entitled. They understand that they need to learn the important skills of the future and they selected BASE as their high school for that reason.

Like AFSE, BASE is a four year high school that teaches a college prep curriculum but adds four years of computer science education alongside. These students will be well prepared to go to two year and four year colleges after BASE, but it is also possible that some of these students will go right into the workforce after high school. The idea behind BASE is to give them the skills so that they can get a good job when its time for them to stop studying and start working.

If you need a dose of hopefulness and optimism for our future, go visit AFSE or BASE. I have visited both schools in the past two weeks and nothing puts a smile on my face more than young curious kids who are excited to learn something new and confident in their abilities to do so. When the students exhibiting that behavior are from communities in NYC that generally lack these kinds of opportunities, it is even more exciting to me.

If you would like to help BASE, the best way to do that is to sign up for the iMentor program and mentor a BASE student in the iMentor program. The committment is one weeknight a month for a couple hours (6-8pm) plus occasional emails with the student. I have attended these iMentor sessions and they are action packed well organized affairs that facilitate the mentoring process. If you live in Westchester, Connecticut, The Bronx, or the eastide of Manhattan, you are well situated to mentor at BASE. You do not have to be a software engineer to mentor at BASE. You just need to be a caring adult with something to offer a BASE student.

Obviously engaging with a school like BASE is extremely helpful to the school and the students, but I can tell you that it is also very helpful for you as well. I know how much joy I get from these schools and these students and I bet you will too.