Dream It And Code It

A few months ago, I posted about a student coding contest called Dream It Code It Win It. I attended the awards contest last night at The Great Hall at Cooper Union. I love that space. You feel the history when you walk into the room.

The majority of the event was a panel event which in my opinion was a waste of time. I wanted to see the students present their projects. Which sadly did not happen. But the students were invited up onto the stage to collect their awards.

In the high school category, almost half of the participants were women. That is a fantastic stat and hopefully a sign of things to come with women and coding.

I was super excited to see a team from The Academy For Software Engineering win one of the awards. That is a great accomplishment for a school that hasn’t yet completed its second year. Here is the team from AFSE getting its award. 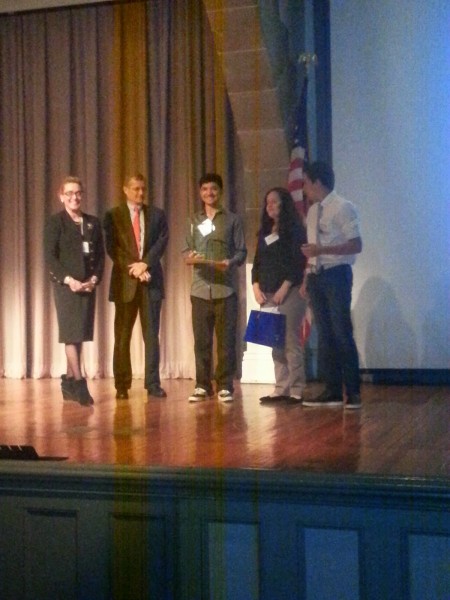 It was also really fantastic that The Young Women’s Leadership Academy (an all girls high school in NYC) fielded a winning team. I’ve heard great things about that school.

Not surprisingly Stuyvesant High School had three winning teams. The Stuyvesant CS program has been around for almost twenty years and its leader Mike Zamansky is one of the unsung heroes of the NYC tech scene.

Mike sent me videos last night after the event for the three winning teams from Stuy. One of them is so good, I think it would easily get funded on AngelList. It’s called Cartwheels (great name) and here’s the video.

These kids eat at food carts every day, they dreamed of a better way, they built it, and they won it. That’s awesome.