At our portfolio company CEO Summit this spring, the 60 or so leaders in attendance asked us if we could figure out a way to aggregate some insights across our entire portfolio and share the data with them. We said we would see about that.

So this summer, we hired Max Heald for a three month stint after he graduated from college and tasked him with figuring out how to do this. The first constraint was that we were not going to ask our portfolio companies for data. They have businesses to run and they don’t need us dumping a big data request on them.

So we pulled together all the data we already had on our portfolio companies, the spreadsheets, the pitch decks, the board decks, the financial reports, etc and asked Max to comb through it and see if there were insights in the aggregate data.

Of course there was. Here’s an example of something we were able to determine via this effort. 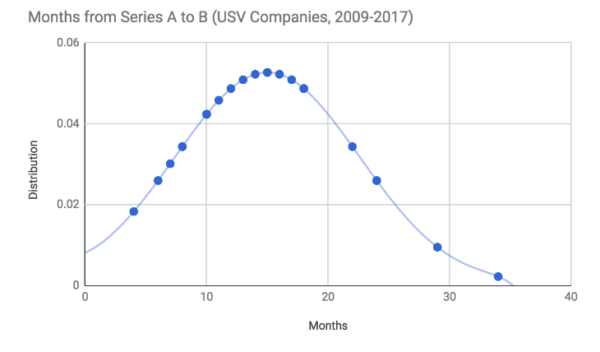 I have been telling the companies I work with to plan on eighteen months of runway from a financing and three to six months to raise the next round for years. But it is nice to see that advice validated in data.

Along the way Max saw a lot of board decks and asked us if he could write a post on the USV blog describing some of the best practices he saw. We encouraged him to do that and he published it today. Check it out.