All over the city this week, students in NYC’s public schools have been celebrating CS Education Week by doing events and hackathons to showcase their coding skills.

Most of these 500 schools, and many others around NYC, participated in CS Education this week. I was out in the schools along with my colleagues at the Department of Education, CSNYC, and the companies that support us, including Google, Accenture, and Alexandria Real Estate.

I met this eighth grader up in the Bronx at In-Tech Academy, a 6-12th grade school that specializes in STEM education and mostly pulls from the Kingsbridge section of the Bronx. He told me that he wants to be a game designer when he grows up. I told him he was well on his way and that he just needed to keep up his schoolwork and his excitement for coding and making things.

But it wasn’t just me out in the NYC public schools this week.

A bunch of Google engineers went out to the schools and helped with the hour of code. Google has developed a K12 CS Ed curriculum called CS First and Stephen Bloch was helping a student do a lesson from that curriculum. 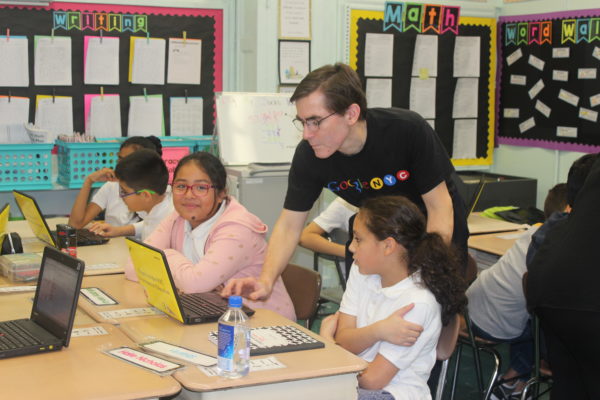 The thing that most excited me this week was to meet all of the NYC public school teachers who have been trained under the NYC CS4All program to teach CS to their students.

This is a photo of a teacher named Ms Calise from Horace Mann, PS90Q in Queens, where a bunch of teachers have taken advantage of the CS4All program to learn how to teach CS skills to their students. 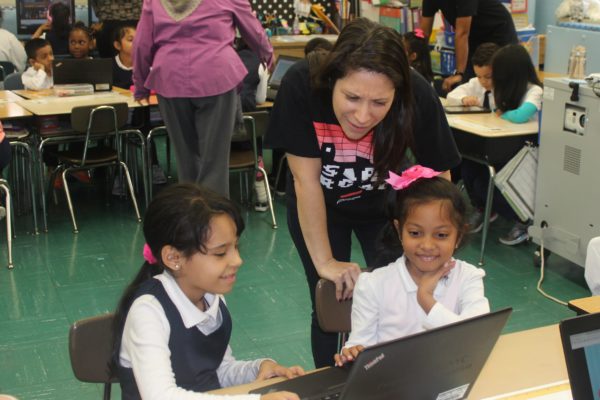 So, needless to say, this week has been very gratifying for me. CS Education is seeping into hundreds of school buildings in NYC and will continue to do so for the next few years until it is in every school building in NYC.

I am so thankful for the generous support of corporations and non-profits like Google, Accenture, Alexandria Real Estate, Hearst, AOL, Two Sigma, Wachtell Lipton, Math For America, Robin Hood, Hutchins Family Foundation, Paulson Family Foundation, and many many others, without whom this work could not happen.

If your company or non-profit wants to join this group and help bring CS to all students in NYC, please email me or leave a comment in this blog post and I will contact you.