History Doesn't Repeat Itself, But It Does Rhyme

I thought of this in reading a few blockchain sector reports this morning.

David Kelnar‘s “blockchain primer” is a very good summary of what is promising about the crypto sector and what is challenging.

In his summary at the end, he writes:

I take that as a suggestion that the crypto sector is following essentially the same timeline as the web sector. Facebook launched in Feb 2004, four years after the start of the internet crash. So using David’s timeline, the killer app for crypto might launch at the end of 2021 or early 2022.

But then there is this chart from Morgan Stanley’s recent report on BTC and Libra: 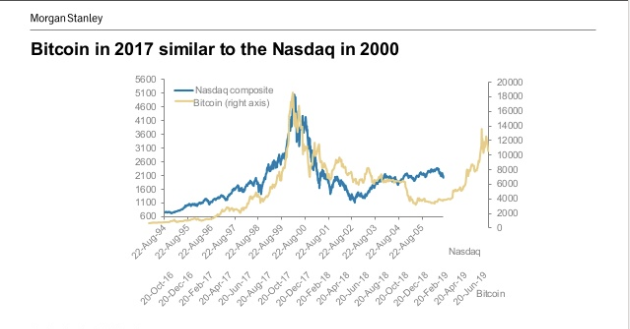 As you can see in that chart, Morgan Stanley’s timeline for Bitcoin is much faster than for the Nasdaq. It seems that their implicit argument is that the crypto sector will move much more quickly through its ups and downs than the web did back in the 90s and 00s.

I am more in David’s camp than Morgan Stanley’s camp. I think the crypto sector is progressing, but slower than I would like. I remain long term bullish but short term frustrated with the crypto sector. As I have been for quite a while now.