Martin Tobias adds his view to the debate that has been raging on this blog and elsewhere since Vonage raised $105 million.

I agree with Martin’s take on this.

The Smile and The Knife in the Back

I read last night on Jeff Jarvis’ blog that George W Bush called John Kerry “heroic” in an interview with Matt Lauer on the Today show which airs this morning.

This is the same guy whose political advisers approved the Swift Boat ads which accused Kerry of lying about his record in Vietnam. I bet we’ll find out sometime after the election that Bush himself approved of those ads.

We are witnessing a President who has his hatchet men do his dirty work and then appears on TV to pretend he’s above it all.

I woke up this morning to this picture on the front page of the New York Times.

It reminded me of why I am not in my hometown this week.

Because its been highjacked by an Unwelcome Guest who in a cynical attempt to wrap his re-election campaign in the cloak of 9/11 has taken possession of a city whose values stand in stark contrast to his own.

And so for my MP3 of the week, I reached for the man of the people, Woody Guthry, who wrote a moving song about fighting the rich and powerful called The Unwelcome Guest. This version is sung by Billy Bragg and Jeff Tweedy and appears on the first Mermaid Avenue record.

Om Malik and Bill Burnham are having a discussion about whether Vonage’s plan to get big fast is the right way to become the leader in the consumer VOIP business.

Bill thinks it has a chance.

I have my doubts as well. I don’t like the “get big fast” business plan. It, by definition, assumes if you don’t get big fast, you aren’t going to get big at all. I’ve seen this movie end badly many more times than I’ve seen a happy ending.

And I’ve invested in VOIP as well. It’s a price commoditizing business if I’ve ever seen one. There are very few differentiating factors in VOIP service today. If Vonage isn’t working too well, you just swap it out and put in ATT CallVantage.

It does feel a lot like online brokerages all over again. Thanks for that analogy Bill. It works for me.

I’ve said many times that I like transparency and its one of the main reasons I blog.

There’s some interesting commentary out there right now about the lack of transparency into Google’s business and the easy way for them to solve that.

Seth Goldstein makes a very persuasive argument that Google should release its clickstream data to the public. That’s transparency for sure.

And Steve Goldstein (no relation) makes the point that Reg FD has caused less, not more, transparency into public companies and the market is looking for new data solutions to bridge that gap.

Martin Tobias points out that Blogger has integrated AdSense. I agree that’s a no brainer, but still its nice to see relevant ads on Blogspot blogs.

I run AdSense on my TypePad blog, but it was a pain to set it up.

This stuff has got to get integrated. I am glad to see its starting to happen.

Lot’s of great stuff continues to come from the comments section. 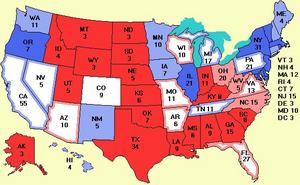 Yesterday I was pointed to this site that tracks the polls in an electoral college format.

Right now, this site has Kerry 270, Bush 259 with Colorado too close to call.

Apparently the swift boat ads have cost Kerry Ohio, Wisconsin, and Missouri for the time being.

I took a ride out to Lazy Point this morning at sunrise.

My friend Gordon told me about this spot. It’s where he kite boards. I don’t do crazy stuff like that, but he does.

Anyway, it was a beautiful morning.

On the way out there I rode past Napeague State Park and saw this bird hanging out in its nest up on a pole in the middle of the marsh.

When I got out there, the sun was up over Napeague Harbor and it was just me and the seagulls.

A nice way to start the morning.

Discuss on Twitter
View Discussions
#Blogging On The Road#Photo of the Day
Aug 25, 2004

I asked for it and they gave it to me. You have to love the commenters. Some of these people are way smarter than I am. Here is the chart of the Presidential race futures market at the Univ of Iowa Business School.

It will be interesting to see how this chart looks after the Republican convention.

A friend of mine has a really nice company. He is doing a financing. He had an investor group lined up that didn’t want to pay the valuation he was looking for. But he liked them and was working on closing a deal. There were some issues getting in the way, but he was working through them. Then along came another investor offering a much better deal, one that met his valuation target. Initially he rebuffed the new investor, but when the issues with the first deal became more difficult to resolve, he was forced to move to the second investor at the higher price. After much work on both sides, the new investor decided that they would move forward, but only at a price that was more or less equal to the first deal. My friend’s company will be fine regardless of what he does since he doesn’t really need the money, but they wasted a lot of time and energy on these deals and ended up right back where they started.

The second one is worse. It’s a story I heard this week about a debt financing for a company that took place several years ago. The company was in need of a refinancing and it was at a time in the market when refinancing debt was very hard. It was a bleak situation. Then along came a group that represented some union pension funds. This group arranged a debt financing by the union pension funds. And they got paid a nice fee for doing that. They had a small ongoing interest in the investment itself but the upfront fee was a very large part of the compensation. The debt financing was provided on very attractive terms for any market environment, and amazing terms given the market environment at that time. Well it turned out that the agent representing the pension funds was giving a portion of the fee back to the pension fund managers. This all came to light. Some people involved went to jail. The company got deeply involved in the mess, went into a restructuring, and the original equity holders were wiped out.

These are not good stories. But they are the kind of stories that you need to hear every once in a while to remind yourself that too good of a deal is exactly that.