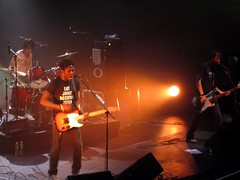 We went to see Bloc Party last night and they lived up to the hype.

It was one of the best performances I have seen from a new band in a long time.

They played pretty much their entire Silent Alarm record and at least a couple new songs including Two More Years which was my MP3 of the Week two weeks ago.

The highlights of the show were She’s Hearing Voices which is so much better live than on the record, This Modern Love, and Banquet which really got the place rocking.

The lead singer Kele Okereke has amazing stage presence, voice, and intensity. He ‘s got the whole package.

I have very high hopes for these guys.  I just hope they don’t outgrow these smaller venues too soon.

I posted a bunch of photos of the show on Flickr in case you want to see more.