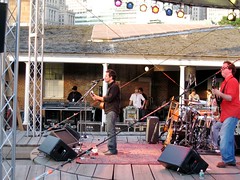 The James Taylor or Paul Simon of now is Josh Rouse. He makes wonderful music and every record he puts out is great.

We saw him play to a crowd of between 500 and 1000 at Castle Clinton, a historic fort in the battery in lower manhattan last night.

As Josh said when he was introducing my current favorite Josh Rouse tune Summertime, "what a nice vibe here tonight".

Brad and I wrote a post on the Union Square Ventures weblog describing how we are going about finding a replacement for our analyst Charlie O’Donnell who just left us to join our portfolio company Oddcast.

We talked long and hard about how we should go about this search and I have high hopes that our approach is going to surface some really interesting candidates.

Mark Pincus is thinking of going long Yahoo!  No wait, he bought it yesterday.

The last trade he blogged was his short eBay/long Amazon trade which netted him a sweet 25% gain in a month or two, while the market was falling apart.

I like to pay attention to Mark’s picks.  He’s what you call a money maker.

His timing on Yahoo! couldn’t be better. Yahoo!’s stock is off 20% on the news that their new search platform, code named Panama, is going to be late by as much as six months.

It is hitting its numbers and is on plan to earn $2bn of ebitda this year.

So you can buy Yahoo! at 19 times trailing EBITDA and about 17x this calendar year’s EBITDA.

That’s a pretty compelling price for one of the few firms that is riding the Internet wave instead of getting trashed by it. The current year EBITDA multiple is a bit lower than that of News Corp.

Sure they have issues in search. They are a distant second to Google and don’t monetize search nearly as well as Google (which is where Panama comes in). But according to Comscore, they are holding their share while everyone else is losing share to Google.

And when it comes to banners, which are the hot growth sector right now, Yahoo! is king.

So I am with Mark. Now’s a good time to buy Yahoo!. I think I’ll join him on this trade since I blew it and failed to do that on the eBay/Amazon trade.

The republicans have been experts at using “wedge issues” like gay marriage, gun control, etc to draw votes from the very people who their economic policies harm the most. Sometimes I just sit back and marvel at how good the republicans are at politics.

Of course they do. It has the potential to prolong life, reduce suffering, make our lives better. And if we don’t do the research here in this country, they are going to do it elsewhere and so we’ll be falling behind in a critical area of biotechnology if we don’t change our stem cell policy.

We use the hearts, livers, and other body parts of dead people all the time to make other people’s lives better. We might not like how they died, but the fact is they are dead and we at least ought to get something good out of that.

I hope the democrats make a big issue of this in the coming mid-term election. It’s good that Bush vetoed this. It would be good if the Republicans can’t summon the votes to overturn the veto.

Because the administration is wrong on this one and America knows it.

Cash flow is what matters. Cash flow per share is what I care about. And how fast its growing

That’s been in the footnotes for years

Its a waste of time. Give the accountants what they want and move on

The accounting board has made a mockery of the income statement. A gaap statement is useless to me now

I have to back out all these non cash charges. Who does it help?  The little guy who is trying to figure out the stock market?  Hell no, it helps the big guys with the spreadsheet jockeys

I’ve heard from a lot of people that my blog sidebars are such a mess they can’t deal with them.

It’s true that I’ve got a ton of blog widgets on my sidebars and I think they are seriously impacting the page load times. I am sorry about that.

But I can’t help myself. I find cool stuff and I want to play with it and my blog sidebars are my petri dishes. It’s the place I get to play with new web stuff.

So with that intro, I want to introduce three new blog widgets I’ve added to my sidebars.

1 – coComment – On the right sidebar, under my community faceroll, I’ve added a coComment blog widget that in theory should list all the comments I’ve left on other blogs that also use coComment. And I’ve added coComment to this blog so you can do the same thing. I think there needs to be a consolidated comment system for the web and coComment is the closest thing to it right now. I’ve seen some cool stuff coming through my office that leads me to be hopeful that we are going to see even more good work in this area soon.

2 – Streampad player – also on the right sidebar, at the top of My Music links. This widget loads the last 50 mp3s I’ve posted to my blog and let’s you play them as a playlist. It loads super fast but you can only listen while you have the blog page open. If you navigate away, the music stops. It would be great if you could launch the player into a new window and keep it playing. There are some other things I’d like to be able to do, like separate the mp3s I post from the podcasts I post, but for now, it’s pretty damn cool and I invite all of you to hit the play button and listen the music flow.

3 – Root Worms – on the left sidebar right below my blogroll. I’ve been sending my clickstream data to Root Vaults via the attentiontrust recorder for a while now. These worms let me show my clickstream data to the world. Want to know what I’ve been searching on or clicking on? Just take a look at the root worms and you’ll see. I need to get the attentiontrust recorder working on my new MacBook Pro as this data is just the search and clickstream data from my thinkpad which I’ve mostly stopped using. I hope to have that set up by the end of this week.

I will keep these widgets up for as long as I find them useful. I hope you like them too.

My mp3 of the week this week is Saving Grace, the single off the new Tom Petty record, Highway Companion.

The record isn’t out until next week, but I heard Saving Grace last night on KFOG.

After I posted Saving Grace, the folks at Rhapsody alerted me to the fact that Highway Companion is streaming now on Rhapsody. Great stuff. Check it out.

How many times have you wanted to buy some time? Of course, you can’t buy time. At least not that I know of. If anyone out there has a time machine, I’d love to buy some time on it.

When people say they want to buy some time, it’s usually that they want more time to complete something or make a decision. And that time costs something and its more than just money.

As a person who is involved in financing startups, I often think of time as burn rate. If it costs a company X dollars to operate, and someone wants 3 more months, then it costs 3x dollars to buy that time.

But that’s only one part of the cost of that time. There’s the opportunity cost of not being in the market if it’s a product launch that’s being delayed. There’s the air time you are potentially giving your competition. And there is the continued burden on your team.

I am particularly nervous when someone wants to buy some time to make a decision. It’s rare that more time will give you more clarity on a decision. I prefer that people make a decision based on what they know now and go with it. More times than not, that will be the best decision anyway.

I don’t mean to suggest that buying some time is always a bad strategy. The early stage venture business is all about buying some time. We’ll often put up a small amount of money to fund an early stage business 6 to 12 months to see if they can get to a place where we can get comfortable putting up significantly more capital. That’s buying time, but it’s really buying an option that expires in a fixed amount of time. As long as you are willing to let the option expire unexercised, it’s a fine approach.

Buying some time is a common approach to business and life. At times, it’s a decent approach.

But often you aren’t buying time, you are wasting time.

That doesn’t mean they sold those ads, my guess is that many of them came from third party networks, but it does seem to indicate that marketers may be getting more comfortable advertising next to user generated content

Where It’s At In Music Discovery

People talk about Pandora and Last.fm as if they are the holy grail of music discovery.

Bob Lefsetz moans the loss of FM radio and drives around in his car listening to XM play 20 year old music and thinks XM is where it’s at in digital music.

XM and Pandora are for the over 40 crowd who like their music spoon fed to them. They aren’t anywhere near where it’s at in music discovery.

If you want to know where it’s at in music discovery these days, you have to be on the mp3 blogs. Because that is where the next big act is going to be launched. Hell it has already happened. Take my beloved Arctic Monkeys who I found on the mp3 blogs last year. That’s where the people who really love new music do their thing.

That’s all it takes, a couple of a hundred blogs, to discover cool music. They post it and we discover it. And all we have to do is click on the link and hear the music. None of that bs 30 second sample stuff. You get the whole song on the mp3 blogs and you get it as much as you want.

And better yet, there’s an aggregator out there called The Hype Machine which culls all the mp3 blogs and serves up an aggregated playlist. It’s like delicious (link density matters) and you can get recent or popular or just one act or just one blog. And Hype Machine has its own player so you can do the spoon feed thing if you want.

I find so much great music on the mp3 blogs and the hype machine. Just last week I found a great band called TV on the Radio. I’ve been listening to them on Rhapsody and am going to buy the record.

What mp3 blogs do is combine the best of radio, music magazines, and the web into one ecosystem that works to surface interesting new music. If you want to dive into mp3 blogs, start with the HypeMachine and start listening and clicking on the links. You’ll be entering the future of music discovery.